He is retroactively referred to as RPM Green Ranger or Green RPM Ranger as well but this is more in reference to the show, rather than a proper label.

Before becoming a Ranger, he was an associate of Fresno Bob, the boss of the Scorpion Cartel, an infamous crime syndicate. Clumsy even back then, he would often fail the missions given to him, but continued to work for the Cartels to get money to help support an orphanage full of ill children that didn't have the resources to get proper treatment. Ziggy's last chance came when he was sent to get a truck and deliver it to the five main Cartels of Corinth. However Ziggy, along with the truck, disappeared from Corinth, making the criminals believe he'd cashed out the shipment for himself. In reality, Ziggy discovered the truck was full of $5 million worth of medical supplies that he could use to support the children in the orphanage. He never told anyone what happened out of fear the orphanage would be targeted. He fled Corinth before henchmen from the Cartels could get a hold of him.

Heading back to Corinth

When Ziggy found Dillon wandering the wastelands searching for Corinth, he made a failed attempt to hijack the loner's car before deciding to escort him to the city.

Through Dillon's skills, the two were able to make it past the Venjix barricade and into Corinth, but when it was found that Dillon had internal Venjix hardware, they were both thrown into prison. After Dillon was confronted by Colonel Mason Truman, he agreed to become the Black Ranger on the condition that Ziggy would be freed from prison. Ziggy was thus set free alongside Dillon and joined the Rangers as an assistant.

Go for the Green

Ziggy later tried to help the Rangers out by scheduling auditions for the Ranger Series Green, which at the time lacked an operator. As Ziggy frantically tried to salvage the auditions after a rough start, he was confronted by Fresno Bob's men, to whom still believed Ziggy owed money. It was then that Tenaya 7 under the guise of a human, saved him. Ziggy, impressed with what she could do, instantly brought her to the auditions. When the Rangers agreed that Tenaya would be perfect to fill the role of Ranger Green, Ziggy was sent to get the Morpher and deliver it to their new recruit. When Ziggy returned, however, he discovered Tenaya was actually one of Venjix's latest soldiers under orders to obtain the morpher.

After a frenzied chase, Tenaya 7 eventually caught up with him. Struggling to keep the morpher away from her, in an act of desperation, Ziggy activated the morpher bonding sequence, and became Ranger Green himself. His unauthorized activation of the morpher initially caused blatant disapproval amongst Doctor K and the other Rangers due to his lack of skill, Dillon however managed to stop their arguments by reminding them that it if Ziggy hadn't taken it then Venjix would have.

As Ranger Green, Ziggy still has a lot of learning to do. He still can't fully control his powers and his fighting style (or rather, lack thereof) leaves much to be desired, but what he lacks in skills, he more than makes up for in heart. When he first became a Ranger, he was reluctant, frequently hiding instead of fighting, and was, as expected, extremely incompetent at handling the Ranger tech, especially at controlling his new teleportation powers. Since then however, Ziggy has shown signs of improvement, able to hold his own against the Grinders despite his still apparent clumsiness, even proving to be fairly useful in combat. He also seems to be unsettled by the Ranger powers. For example, he questions why there is an explosion when he morphs, or why he must scream at the top of his lungs to activate Morphing sequence.

Ziggy and the Doctor

Doctor K initially found Ziggy to be quite annoying, and she was openly hostile to him. Even after she begins to open up upon Gem and Gemma's return, she remains frosty to him, often refusing to call him by name as she began to do with the other Rangers. Ziggy, however, seems attracted to Doctor K; in the episode "Dome Dolls", he admitted to her he had a dream where he was on a date with her. He has also expressed a mild attraction towards Tenaya 7, once stating, "When she's not pounding us into the pavement, she's kind of a hottie." Soon enough, it becomes obvious that Doctor K does actually think well of Ziggy; she accidentally once called him by his first name in front of Gemma and even named her password after him, which Summer figured out (though she lied to the other Rangers about it to keep Doctor K's secret safe).

She finally begins to turn around when the both of them are accidentally trapped in a cave that had little air on Doctor K's birthday. Determined to prevent what could be their last moments and Doctor K's last birthday from being completely miserable and regret filled, Ziggy puts on a shadow puppet show for her and to his joy and relief, is finally able to make her smile.

After the war, Ziggy and Doctor K announce they are opening a children's school, where Doctor K will teach biofield physics and Ziggy will teach shadow puppetry and cooking. She also finally refers to Ziggy by his first name, saying that since he is no longer a Ranger, she needs to call him something. She also seems to tolerate his feelings for her as friends, allowing Ziggy to put his arm around her.

Ziggy and the other Ranger Operators returned as part of the army of Legendary Rangers that helped the Mega Rangers defeat the Armada once and for all, fighting in a huge battle against hundreds of X Borgs and dozens of Bruisers.

During his research in the Ranger archives,Devon Daniels finds information of the Ranger Operators in another dimension and sees a picture of Summer and his team with Doctor K.

When the Time Force Rangers are investigating a fracture in time and space that risks splitting the multiverse apart, Wesley Collins observes that the fracture is also threatening at least three other universes that are home to the Mighty Morphin Power Rangers, Ziggy along with other Ranger Operators, and Dino Charge Rangers.

When events set into motion by Lord Drakkon caused the timeline to split into pocket universe, each anchored on a powerset, the Ranger Operators were split off into their own pocket universe.on Doctor K's birthday, he and the other Rangers operators give a pie to Doctor K.

However, Ziggy and the other Rangers, they are scream by Doctor.K due to she due to the traumas that she had in her childhood, suddenly several Blue Samurai Sentries and mastodon Sentries attack the dome city of Corinth, The Ranger Operators transform and fight against Sentries, the Rangers manage to keep Lord Drakkon's forces at bay,until Ziggy along with the other Rangers they are witnesses the Mastodon Sentries attacks Dillon using a Dragon Cannon later, Ranger operators are turning the tide of battle against the Rangers Sentries,the result is that the Rangers Operators are victorious in the battle,the Rangers Operators back with the Doctor. K,they are seen how Doctor.K eat the pie that Rangers Operators that given to her, Ziggy says happy birthday to Doctor.K.

In Corinth city Ziggy along with the other Rangers Operators and the military defend the frontier of Corinth city,fighting against more Rangers Sentries ,Ziggy attacks a Sabertooth Sentries with a Nitro Blaster,Ziggy along with the Rangers little a little they are getting tired during the battle , until the Tyrannosaurus Dinozord drove by Jason and Lauren help them, causing a brief retreat of the Rangers Sentries,Rangers Operators meet Jason Lee Scott and Lauren Shiba,Ziggy decide guides Jason to meet the doctor.K,

until that Ziggy and the other Rangers they are notified by Dillon looking far away how Drakkon going Corinth city with more Rangers Sentries , Psycho Blue, Psycho Pink,A-Squad Red Ranger,A-Squad Green Ranger,A-Squad Yellow Ranger and Koragg, The Knight Wolf.

Teleported to the command center

During another fight in Corinth against Lord Drakkon's Forces,Ziggy and Dillon figth against a Blue Samurai Sentries and Green Zeo Sentries,Ziggy giving all his effort in battle but more Drakkon's Sentries attack the Rangers ,during the battle Ziggy is seen confronts a Blue Samurai Sentrie,Ziggy and the other Rangers they are witnesses that how Drakkon stole the morpher of Summer fortunately reinforcements arrived to help the Rangers Anubis Cruger, Jack Landors, Schuyler Tate, Sydney Drew,Bridge Carson, Elizabeth Delgado, Red Lightspeed Ranger, Dino Charge Purple Ranger, Jungle Fury Wolf Ranger,Megaforce Yellow, Megaforce Blue and Yellow Dino Ranger ,however he goes to the Command Center alongside the others Rangers and Doctor K.

Ziggy along with the other Rangers their morphers are upgrade by Doctor K , he prepared amoung other rangers to teleported Ziggy is seen with Quantum Ranger, Super Megaforce Blue, Zeo Ranger III - Blue and Jungle Fury Wolf Ranger in the moon of world of coinless for the fight against Drakkon against his Ranger Sentries,led by Jason,Ziggy using his Turbo Axe attacks a several machine enemies.

In the timeline of the World of Coinless, Lord Drakkon himself torture Mysterious Prisoner Ranger, Drakkon reveals to his prisoner some Rangers realities,where first is seen the reality of the Dino Charge Rangers they are seen fighting against Vivix ,second is seen the RPM World Where is seen Ziggy and the other Rangers Operators they are seen fighting against Grinders.

Ziggy along with The Ranger Operators are among all the Ranger teams which appear in the Korean-developed mobile game Power Rangers Dash.

The Ranger Operator Series Green is among the Rangers who feature in Power Rangers Legacy Wars, he is a Epic (Leader), Epic (Assist) character ,and represents Ranger Operators alongside Gemma.

Ziggy is kind of an all talk guy, which tends to get him in trouble. He is often made out to be a clown and isn't easily taken seriously by others. He is generally clumsy, wacky, silly and a bit of a coward, but for what he lacks in skill and physical prowess, he makes up for with heart. He usually wants to stay out of trouble, but won't hesitate to help the other Rangers. He's simple-minded and somewhat stupidly optimistic, which often leaves him on the receiving end of Doctor K's blunt verbal insults. Doctor K's obvious lack of acknowledgment of him in comparison to how she treats the other Rangers tends to frustrate him, especially since he fervently expresses the desire to be her friend and almost compulsively tries to initiate a positive conversation between them.

Episodes when he uses his teleportation ability: 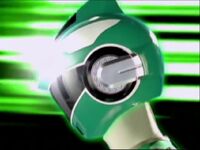 The Ranger Green Key is Ziggy's personal Ranger Key. This key along with the majority of the Core Ranger Keys are seen lining the Command Center's interior walls. This key is mainly used by Jake Holling (Super Megaforce Green) who uses it to fight as Ranger Green.