RangerWiki
Register
Don't have an account?
Sign In
Advertisement
in: In Space, Ranger, Space Rangers,
and 13 more
English

Survival of the Silver

Zhane is the first Silver Ranger, and the sixth member of the Space Rangers. He also took on the identity of Psycho Silver of the Psycho Rangers for a brief time.

Retroactively, he is also referred to as Silver Space Ranger or In Space Silver Ranger- variations on his in-show labels, though the latter is more in reference to the show itself than a proper label.

Zhane was born a human on the planet KO-35, along with Andros and his sister Karone. The three were adept in telekinesis.

Zhane became Andros' best friend was, at times, the only one who could make Andros smile or laugh. When the two became Power Rangers, it was a dream come true for both of them. As the Silver Space Ranger, Zhane and Andros were in another battle against evil forces. Dark Specter launched attack after attack on KO-35. In the midst of the battle, Zhane saw that Andros was in trouble when he was engaging with a red statue monster. Without a second thought for himself, Zhane leapt in front of Andros and took an attack meant for him, saving his friend's life but leaving him mortally wounded. Unable to treat Zhane's wounds properly, Andros placed him in a cryogenic tube in a hidden compartment in the Astro Megaship, in the hopes of someday restoring him.

For two whole years, Andros watched over his friend hoping for any sign of him awakening. After crash-landing on Kadix and being attacked by scavengers, Zhane's life support briefly failed, before suddenly the Silver Ranger awakened from his deep freeze and fought alongside the Rangers. Zhane proved himself a valuable asset early on, when he defeated Ecliptor single-handedly, a feat that all the other five Rangers - even working together - struggled in doing.

Despite being overjoyed at Zhane's return, Andros briefly struggled with his presence among his newfound friends since his hibernation. After learning Ashley was interested in learning telekinesis, Zhane was happy to teach her how to focus her thoughts. Andros quickly grew suspicious of Zhane's motivations, suspecting he was trying to endear himself to Ashley over himself. The friction was brief however, with the two reconciling soon afterwards.

However, during the battles that would follow, Zhane's powers randomly began to inexplicable fail, forcing him to demorph during battles. Zhane knew he needed some help, but was still reluctant to tell the other Rangers. He found Alpha 6 and told him of his problem, although with an ease dropping Cassie and Andros misinterpreted this as Zhane revealing he was actually dying. Andros and Cassie informed the other Rangers, and they all agreed to make Zhane's final days as comfortable as possible. Much to his amusement, Zhane realized what the other Rangers thought and couldn't resist playing along. Zhane eventually discovered the reason he couldn't stay morphed for very long was due to his powers "leaking" as a result of remaining in his morphed form over the course of two years in cryogenic suspension, meaning he'd have to manually recharge them. Discovering an electric storm, he used its raw energy to restore his Digimorpher back to full maximum power. Upon returning to the ship, and unaware the other Rangers had learned the truth, Zhane was pressured into admitting he had taken advantage of his friend's misunderstanding, leaving him covered in cleaning supplies.

After saving Astronema from one her own monsters, Zhane tended to her needs in a marsh. Once she awakened, Zhane had her taste a roasted marshmallow. Seeing a smile on her face lightened Zhane's day. Astronema left with a quick "thank you", reminding him that they were enemies now and forever. Zhane realized that he had a romantic interest in the Princess of Darkness, as she was interested in the Silver Ranger in return. Zhane received a note from Astronema saying she wanted to meet him at the campfire. Zhane was excited and raced back to the Astro Megaship to get ready for his date. However, he was called into duty to stop Horrorbull and later went to see Astronema. Until he got there, Zhane was very late, which Astronema was really angry for - so angry, she blasted him. She said that she never wanted to see him again. Zhane was devastated. He stood there torched and defeated. The other Rangers tried to get Zhane to talk to them, but Zhane could hardly tell them that his heart had been broken by the Princess of Evil.

As time passed, Zhane recovered from his encounter with Astronema. He still cared for her, but he got on with his life. Andros and Zhane eventually discovered the rebels of KO-35, whom were hiding out from Dark Specter. Realizing the rebels needed more manpower in order to survive, Zhane opted to stay behind with the Rebels, reducing the Rangers to five once more.

Zhane eventually returned to help the Rangers stop an asteroid with his new Mega Winger. When this mission was completed, he joined the others back on the Astro Megaship. He was told that Astronema was actually Andros' missing sister, Karone. Zhane had admitted that he went on a date with her as Astronema, giving them both hope that one day they can help Karone.

Although he most often opted to act on his own, Zhane continued to return and offer his help as much as possible. He helped the Rangers with their various battles and eventual defeat of the Psycho Rangers, even going as far as to disguise himself as Psycho Silver while his teammates were all Blue Rangers.

TV STORY-Five Of A Kind

Dark Specter launched a full scale attack on the Universe. While Andros went to the Dark Fortress to take on his sister, Zhane led the other Rangers in the battle on Earth. The Rangers, with the help of the citizens of Angel Grove, never gave up and continued to defend Earth. As they were battling, Zordon's wave of energy demorphed the Rangers and destroyed all of the villains on Earth. Zhane and the Rangers returned to KO-35 to help the refugees settle in and returned to Earth to lead a new life.

Zhane's whereabouts are unknown due to the fact that he didn't show up with his teammates to help the Galaxy Power Rangers battle the Psycho Rangers again. It's assumed that he's still on Earth leading a new life while protecting it from other threats.

Zhane was featured in a chronicle of Power Ranger history compiled by Tommy Oliver shortly after he formed the Dino Rangers, which was found by the nascent Ranger team in the Dino Lab.

Zhane returned with his fellow Space Rangers as part of the army of Legendary Rangers that helped the Mega Rangers defeat the Armada once and for all, fighting in a huge battle against hundreds of X Borgs and dozens of Bruisers.

He was shown along with Andros when the villains were looking for a past villain to revive with the Reanimizer, and came across Astronema.

When the timeline shatters with each Ranger team belonging to their own pocket dimension, the Space Rangers are attacked by Lord Drakkon. As evidenced by the later appearance of Silver Space Sentries, he fell to Drakkon's forces, whom stripped him of his Morpher.

He was restored when the timeline was corrected.

Zhane as Silver Space Ranger is among the Rangers who feature in Power Rangers Legacy Wars, he is a Epic (Leader),Epic (Assist) character,also represents Space Rangers, alongside Andros , T.J and Cassie.

He's a determined fighter, capable of taking on several adversaries at once. He also has a sense of humor, and comes up with ways to outsmart enemies, such as disguising himself as a clown, and Psycho Silver. Deep down, he has feelings for Astronema/Karone, and is hurt by her initial rejection following a ruined picnic date. However, it is not known if their relationship was rekindled before she took over as the Pink Galaxy Ranger, and joined the Earth colonists on Mirinoi.

Zhane disguised himself as the Silver Psycho Ranger in order to confuse Psycho Blue.

This form is exclusive to PRIS Episode 34.

Zhane disguised himself as the Red Psycho Ranger as a joke.

This form is exclusive to PRIS Episode 36 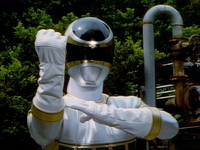 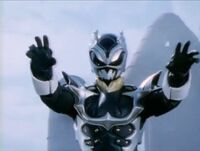