Number 2: International Police, Chase After Them (Flashback)
Number 6: What to Protect (Full appearance)

"So cold."
―Zamigo's phrase for something he despises.

"N-ice joke."
―Zamigo Delma's phrase for something he finds amusing.
"It was fun... Adios."
―Final words before death.

Zamigo Delma (ザミーゴ・デルマ, Zamīgo Deruma) was the marksman of Interdimensional Crime Group Gangler who was responsible for the rise of the Lupinrangers after he abducted their loved ones, and worst of all, as the man who murdered Patrangers’ ally Satoru Shinonome off-screen. Despite himself being a minion of Dogranio Yaboon, he was, in reality, the main antagonist of the series thanks to his orchestration of the conflict between the Lupinrangers and the Patrangers.

One year prior to the formation of the Patrangers, Zamigo Delma used his cryokinetic powers to abduct dozens of humans. Among his victims were Shori Yano, the older brother of Kairi Yano, Tooma Yoimachi's fiancée Aya Ohira, and Umika Hayami's best friend Shiho Ichinose. The three bereaved youths were then approached by Kogure, servant of the descendant of Arsene Lupin, who gave each a VS Changer, offering them the task of gathering the Lupin Collection as the Lupinrangers, which would give them the power to restore their loved ones.

During his time on Earth, Zamigo informed Destra of the collection the Patrangers have. He is then seen walking amongst the people, while whistling. After Bundorute Peggy’s death, Zamigo simply laughed at Destra’s failure and calling it “cold” while eating an ice cube.

TV STORY-Number 6: What to Protect

He is later seen crossing paths with Keiichiro Asaka, with the latter calling him a “weird guy”.

As information of his location came out, he was then confronted by Kairi Yano. When asked if he had any memory of what he did a year ago, he jokingly stated he was breathing. A fight ensued between him and Lupinred, on which the latter almost died if he had not activated the Scissors Dial Fighter at the last minute. After seeing his persistence, Zamigo went and said how much he likes him, when he shot at the Lupinranger one more time in order to escape. But not before saying his name and his desire to meet the thief again.

TV STORY-Number 10: It's Not Over Yet

Later, he was met with Destra Majjo, who confronted him for his reasons for releasing intel about the Lupin collection the Lupinrangers and Patrangers have, only to smile and stare scaringly at the Gangler General.

Later on, he made a business transaction with Giwi. As he watched Giwi fight both Keisatsu Gattai Patkaiser and the X Emperor, he was approached by Raimon Gaorufang with the intent of teaming up, but instead just laughed at Giwi Newzie’s destruction and left with thinking over the proposal.

As Raimon approached Zamigo a second time to get his answer for teaming up, Zamigo instead laughed at the idea because he knows that the purpose of that is to keep him under his thumb as his piece of the Collection is useless in protecting him from his power. Zamigo was then attacked by Raimon to make him pay for laughing at him, but it was interrupted by the arrival of the Patrangers. As the Patrangers finish doing their roll call, Zamigo took the chance to escape and left it upon them to finish off Raimon while calling them “humans”.

TV STORY-Number 25: Make it the Strongest

Zamigo was a mysterious individual who had a strange habit of whistling and eating ice while walking around. He was remorseless, as he just brashly claimed that getting rid of people was easy. He also had tendency to say, “So cold" whenever he becomes shivered/annoyed, as well as sprinkle either English or Spanish into his speech.

However, he wasn't what he appeared to be when he offered both Keiichiro and Sakuya a chance to return to the human world.

TV STORY-Number 41: A Door to Another World He also appeared to be minorly sympathetic, as he seemed to be a bit down after Narizma’s death, as he was such a “handy tipster”.

It seemed that his crimes were mostly done for his own purposes; for the fun of it. Because of this, he had no interest in Dogranio Yaboon's goal of finding a successor, though he didn't actively act against him.

He always enjoyed fighting strong opponents, and found Lupin Red to be an ideal one, especially since Lupin Red almost defeated him when the latter used VictoryStriker for the first time. Ever since that battle, Zamigo marked Lupin Red as his personal target, to the point of threatening Dogranio to not lay a single hand on that particular Phantom Thief, much to Dogranio's surprise. Zamigo was also perfectly fine when he was finally destroyed by Lupin Red, as he commented he really had a good time fighting him.

Zamigo Delma is portrayed by Jingi Irie (入江甚儀, Irie Jingi), who is best known for his portrayal of Jiro/Kikaider in Kikaider REBOOT and later moves on to play Rento Makina 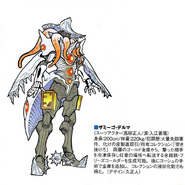 Zamigo Delma's name is based on the phrase "amigo del mal", Spanish for "friend of evil."