"Jason, we've gotta back down."
―One of Zack's most famous lines when the Megazord was being blasted by the Grumble Bee's sonic attacks.[src]

Zachary "Zack" Taylor is the first Black Ranger of the Mighty Morphin Power Rangers in the 'modern' era.

Retroactively, he is also referred to as the Mighty Morphin Black Ranger or Black Mighty Morphin Ranger, though these are in reference to the show, as opposed to proper labels. He is also the second-in-command to Jason Lee Scott until Tommy Oliver returned as the White Ranger.

Zack is a popular and easy going guy with a troubled home life he's hesitant to share with his friends. He meets Jason for the first time in Angel Grove Youth Center.

Zack Taylor was a student who attended Angel Grove High School. A very enthusiastic, upbeat person, he was very close with his friends Jason Lee Scott, Billy Cranston, Trini Kwan, and Kimberly Ann Hart. Zack is a prankster and particularly enjoys holidays such as Halloween, to scare his friends; in contrast he was greatly afraid of bugs and snakes, a fear he partially conquered when he fought the monster Spidertron. He enjoys dancing at every chance he gets, and even developed his own fighting style, Hip Hop Kido, which he occasionally taught. As a close friend to both Jason and Tommy, all three liked to work out together and practice their martial arts.

Zack served as Jason's second-in-command prior the arrival of Tommy and his becoming the White Ranger and eventual leader of the team.

When Rita Repulsa had been released and her intention was to take over Earth, Zack and his friends were chosen by Zordon to defend Earth as the Power Rangers. Although initially dismissive of being chosen, Zack soon discovers that he is right for the job. Zack became the Black Mighty Morphin Power Ranger, and controlled the Mastodon Power Coin and the Mastodon Dinozord.

When they are not saving the world, teenagers with attitudes chosen by Zordon gather at the Angel Grove Youth Center. Trini updates Alpha 5 with the language of the year 1993. Far away, Dr. Carver and Dr. Kenyon discover a new civilization and the largest statue ever built in ancient America. Unintentionally, Dr. Carver activates the terrible cross between monster and robot that attacks the excavation site. Back at the Youth Center, Billy creates a device with internet access when everyone sees the attack on TV. In the territory of the attack, summoning the Dinozords, the Power Rangers fight against a terrible monster. Struck by the lightning of the stone giant, the Rangers lose communication with Zordon and have their pieces exchanged makes it difficult in battle. With the help of Alpha 5, the exchange effect was reversed and the Rangers, winning the battle and returning the giant to its location.

Throughout the remainder of the first season, Zack attempts to gain the affections of fellow school student, named Angela, though she would turn him down several times before conceding to go on a date with him. When their date was ruined by a monster attack, Zack's chances with Angela seemed slim. However, he refused to give up and succeeded in making amends with her after several ruined attempts, earning a kiss on a lips for his efforts.

During an early mission, in Italy, Zack successfully piloted the Megazord and defeated Rita's monster while Jason helped out on the ground. When the Red Ranger's heroics were celebrated over his own, Rita selected him as her first choice to become the Green Ranger, sensing jealousy in him and the desire to become the leader. Zack was tempted by the offer but, instead, unsuccessfully tried to steal the Green Ranger's power coin before she could create such a ranger. He confessed the confrontation to Zordon, but kept it secret from his friends.

Zack and his friends in the form of Power Rangers defeat Korruptor using Dino Megazord.

After Tommy joined the team, Zack became wary of his involvement. He openly questioned how much control Rita still had over him, with his distrust causing him to become confrontational with Tommy on more than one occasion though the two were eventually able to settle their differences. Zack, along with the other original Rangers, were de-powered by the Black Dragon - who had taken Billy's Power Coin to sever their connection the Morphing Grid and their Zords. He was temporarily re-powered by Tommy's Power Coin as a Green Ranger and reacquired his Mastadon.

When Lord Zedd came to Earth for his own ambitions, Zordon gave the Rangers new Zords to battle Zedd's more powerful monsters. Zack gained control of the Lion Thunderzord. The Rangers are driving out to the desert in Billy's RADBUG so they can send Rita back into space without any civilians seeing. During the drive, Zack reveals that he has gotten a gift for his girlfriend Angela: a pair of walkie-talkies designed after characters from an old children's show she likes. Trini explains to Kimberly that people often like to collect things that remind them of what made them happy, though Kimberly can't quite understand it. As the Rangers get out of the Radbug for a breather, Zack puts the walkie-talkies in the car's trunk next to Rita's Dumpster. Up in the Moon Palace, Lord Zedd is still in disbelief that his Scarlet Sentinel has fallen. Seeing the Rangers in the desert, he gets an idea and uses his power on the Radbug. Suddenly, the car comes to life and begins attempting to ram into the Rangers while claiming that it will no longer stand for being treated like a slave. The Rangers morph and use their Power Weapons to create a ramp that flips the Radbug on its roof and immobilizes it. Zedd throws a grenade down and the Radbug grows in size, plus gains a face made from Zack's walkie-talkies (which also gives Rita a means to complain about all the hassle she's getting put through). Tommy summons the White Tigerzord to deal with the Radbug while the other Rangers form the Thunder Megazord, and he tries to stop it by climbing into the runaway vehicle and driving it with his Tigerzord at the wheel. This only serves to anger the Radbug as it turns into a bipedal monster and ejects its Zord-driving driver. The Thunder Megazord rides the White Tigerzord to catch up to the Radbug as it nears Angel Grove's city limits. Once it gets close, the Megazord jumps onto the Radbug's hood and tears its fuel line out to end the joyride.With the Radbug back to normal, Billy tends to repairs while the other Rangers prepare to send Rita on her trip. Zack also recovers his walkie-talkies, which are perfectly intact, and Kimberly admits that she'll never doubt the value of collectibles again.

Later on, a peace conference was soon held to be attended in Switzerland, and only three teenagers were selected to go. Zack, along with Jason and Trini were selected. With his zest for living, upbeat attitude, and charm, Zack was a natural choice at the peace conference. Three of their friends, Adam Park, Rocky DeSantos, and Aisha Campbell would replace them as Rangers. Zack's last Ranger mission was to find the Sword of Light, which he would use to transfer the Rangers' powers. Adam became Zack's successor as the new Black Ranger. His current whereabouts following his return from the Peace Conference is currently unknown. As he has never returned to being a Ranger before The Legendary Battle it is assumed he returned to a normal life.

Zack was featured in a chronicle of Power Ranger history compiled by Tommy Oliver shortly after he formed the Dino Rangers, which was found by the nascent Ranger team in the Dino Lab.

Zack appeared in the picture of the old MMPR team that Dr. Tommy Oliver had with him as a memento of the past during the time when he returned as the Green Ranger again. Kira found the image in this episode while helping Tommy.

Zack and the other Mighty Morphin Power Rangers returned, with his powers fully restored, as part of the army of Legendary Rangers led by Tommy that helped the Mega Rangers defeat the Armada once and for all, fighting in a huge battle against hundreds of X Borgs and dozens of Bruisers.

A Black Ranger responded to his old teammate's signal and returned alongside his fellow Mighty Morphin Power Rangers as part of the Legendary Dino Rangers army. When Evox summoned his massive Chimera Zord, his team joined in summoning the Megazord and aiding in its defeat. With Evox on the run again, the teams departed.

Participating in a final push against Drakkon's Tower on the Moon in the World of the Coinless, Zack manned his station in the Dragonzord Battle Mode led by Kimberly, who Jason entrusted with Tommy's Dragon Armor. Within one of the several Megazords present, the Rangers led the fight against a massive army of Ranger Sentries. Eventually, however, the Megazords were overwhelmed by the arrival of Lord Drakkon's immense Zord, Serpentera, whose assault forced the Rangers out from their cockpits onto the ground.

When Kimberly needs to recruit Power Rangers for help in saving her mom, she goes to South America to find them. As she arrives, Zack teaching a karate class.

When Kim asked for help, Zack and Trini willingly go with her and become power rangers again. At some point after leaving Angel Grove, Trini and Zack began a relationship.

Zack along with the other Mighty Morphin Power Rangers are among all the Ranger teams which appear in the Korean-developed mobile game Power Rangers Dash.

As part of the collaboration by Hasbro in a limited game event, Zack as Black Ranger ,was an unlockable character in Puzzle and Dragons.

Black Ranger in Puzzle and Dragons

Power Axe in Puzzle and Dragons

With the Black Ranger powers taken by the Black Dragon, Tommy Oliver sacrificed his powers to activate the powers of the other Rangers.

As a result of being teleported to Breel, Zack's powers gained Kimberly's Ranger powers, while Billy gained his powers. This swap allowed for Zack to become the Pink Ranger.[2]

When his ability to use his Ranger powers were disrupted by the Shredder, Zack gave his Morpher to Donatello to use and donned ninja streetwear to help fight the Foot Clan. Despite being titled as a "Ranger", Zack's abilities are nowhere near as strong as his morphed form and are on par with how he is unmorphed.

Zack and his Coinless counterpart temporarily disguised as the Mastodon Sentries, alongside Coinless Skull (who disguise as a Tyrannosaurus Sentry) to rescue Ninjor from Drakkon's mind control device.

Zack, no longer a Ranger, became one again through the Sword of Light. 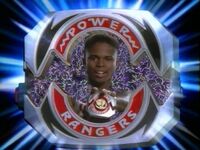 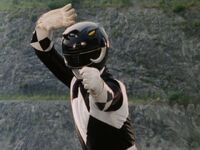 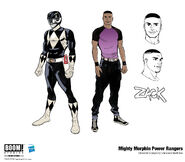