Elizabeth "Z" Delgado is a former street thief alongside her best friend Jack Landors who were given a chance to join Space Patrol Delta and reform themselves. Unlike Jack, Z quickly jumped into the opportunity and joined the team as the S.P.D. Yellow Ranger and for many years to come.

When Kira touched a glowing rock, she saw herself becoming a Ranger. However, she also had a vision of the future Yellow Ranger blasting an unnamed monster.

Z spent most of her life living on the streets - helping the homeless by stealing from those more fortunate. She desired to be a part of something bigger, and when arrested by S.P.D. was offered that chance by Commander Cruger when he made her the Yellow Ranger. Z is the one who always looks out for those who are less fortunate or being picked on.

When young Sam was picked on by his peers for being different, Z remembers what she went through as a child and comes to Sam's aid. When Z was only 12, she was ridiculed for her genetic abilities and was once saved by a mysterious person in the shadows. The person turned out to be none other than Commander Cruger. This inspired a desire to protect others. Through S.W.A.T. training on Zantor, Z learns to get over her differences with Syd and work together as a team, the Rangers take down a renegade A-Squad.

When Jack leaves S.P.D., Z stays with the Rangers and continues to live out her dream of protecting the innocent.

Emperor Mavro was defeated, but the remaining thousands of X Borgs still stand. Tommy gathered all the existing Power Rangers, Z returns with her fellow S.P.D. Rangers as part of the army of Legendary Rangers that helped the Mega Rangers defeat the Armada once and for all, fighting in a huge battle against hundreds of X Borgs and dozens of Bruisers. After the demise of the X Borgs, Tommy shook hands with Troy and teleported off along with Z and the Legendary Rangers. She then returns to the future in the year 2034.

When events set into motion by Lord Drakkon caused the timeline to split into a pocket universe, each anchored on a powerset, the B-Squad Rangers were split off into their own pocket universe.

COMIC STORY- Mighty Morphin Power Rangers 2018 AnnualLord Drakkon then attacked them. She fends off an attack by Lord Drakkon, alongside the B-Squad and C-Squad, despite being depowered by the Black Dragon Cannon.

When the timeline was restored, so was Z.

Z along with the other S.P.D. Rangers as well are among all the Ranger teams which appear in the Korean-developed mobile game Power Rangers Dash.

The S.P.D. Rangers as seen in Power Rangers Dash. 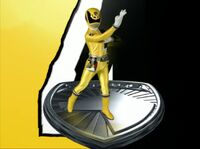