In Tokusatsu, he has voiced the eponymous character

, Beet J. Stag/Stag Buster in Tokumei Sentai Go-Busters, and Galza and the voice of the Yodon Changer in Mashin Sentai Kiramager. He has voiced both Deratsueigar and Waredonaiyer in Kaizoku Sentai Gokaiger. 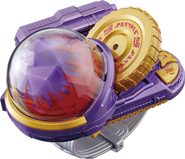