While a poor student at Academia, Yusuke is also a strong leader and quick thinking under pressure. He is brave and a hard worker. Initially starts as hot-headed and sarcastic, but grows into the role of dependable leader as the series progresses. He likes rock music and working out. Although he is initially driven by rage at the anger for the death of his friends by the three traitors, he finally decides to re-devote himself to their dreams for fighting against them.

He was once in love with Rui Senda, but she never loved him back. He was good friends with Kenji Tsukigata during their first year or so at Academia until things went sour between them once Kenji started down a dark path.

Yusuke and his team joined up with the other nine Sentai to stand behind the newest Sentai, the Turborangers, as they faced off against the Hundred Boma Tribes.

In the 2001 Sentai direct-to-DVD crossover film Hyakujuu Sentai Gaoranger versus Super Sentai, Yusuke briefly dueled Gaku Washio (Gao Yellow) in a sword-fight and then lectured Gaku on the many sword-wielding warriors of the Super Sentai franchise, and introduced the Gaorangers to all the 23 other Red Rangers.

As the twelfth Red, Red Falcon's Red Warrior Spirit was embodied by AkaRed.

Years later, Yusuke fought alongside not only his own team, but every single Sentai Ranger in existence, against the Empire of Zangyack when it attacked the Earth in the Great Legend War. After fighting against hundreds of Gormin and their Zgormin commanders. Akarenger noticed the fleet moving towards them, he gathered all the Rangers together and gave them the order to sacrifice their powers to wipe out the first invasion's armada. The Red Falcon powers are later used by Captain Marvelous via the Ranger Keys.

After the Gokaigers defeated the Zangyack, Captain Marvelous returned the Ranger Keys to the Super Sentai. Yusuke and his teammates have their powers once again.

Yusuke, alongside his team, among the majority of the Super Sentai heroes, was caught up in the "Super Hero Taisen" incident which eventually resulted in the Super Sentai teams and Kamen Riders joining forces to defeat both Dai-Zangyack and Dai-Shocker.

crisis, having been summoned by Gai Ikari. They appeared with the Gingamen and Gekirangers to aid Kamen Rider Beast

was destroyed, the Livemen appeared on a cliff alongside all the other past heroes to say goodbye to the heroes of recent years before taking their leave.

"We, the generations of Super Sentai convey our feelings to you. Protect all that lives on this planet. We want those lives to connect to the future. We are counting on you, heroes of life. Please make the connection to the Earth's future."
―Red Falcon to the Ninningers and Zyuohgers.[src]

Red Falcon led a conference of the first 38 Reds, personally addressing the Ninningers and Zyuohgers with a plea to keep up their fight as the greater Super Sentai pantheon intervened to save them from defeat at the hands of the titanic Gillmarda. Empowering the Combination Nin Shuriken to form Wild Tousai Shuriken King, the first 38 Super Sentai further imbued their successors with the power to perform the Zyuoh Ninnin Super Sentai Burst, destroying Gillmarda with the combined power of all 40 Super Sentai.

Yusuke joined the Super Sentai Strongest Battle as a member of Flying Team. It’s unknown whether he participated in any of the matches, but his team was eliminated after losing the second round against the Swordsman Team.

Yusuke alongside with his Sentai Red Ranger predecessors appeared to help the Zenkaigers.

Red Falcon was one of seven Rangers to appear in front of Kaito in a vision to show him that team leaders can be white - or any color for that matter - as opposed to the traditional red.

During the climatic final battle itself, he can be seen fighting alongside Skyrider, Red Hawk and Zyuoh Eagle.

The Red Falcon Ranger Key (レッドファルコンレンジャーキー, Reddo Farukon Renjā Kī) is Yusuke Amamiya's personal Ranger Key and what became of his powers after he along with the rest of the 34 Super Sentai sacrificed their powers to end the Great Legend War.

This key along with the majority of the Ranger Keys were collected by the Red Pirates and later used by the Gokaigers. The Red Falcon Ranger Key was mainly used by Captain Marvelous (Gokai Red), who used it to fight as Red Falcon. It was also used by Gai Ikari on one occasion.

The Liveman keys, along with all the Ranger Keys of the first 33 Super Sentai, were briefly taken by the Black Cross King and turned into Ranger puppets that were fought by the Gokaigers and the Goseigers. The puppet Livemen fired their Biomotion Buster alongside the Changemen, Flashmen, Maskmen, and Turborangers, only to be swiftly defeated by the individual finisher attacks of the Gokaigers and Goseigers as they emerged from the resulting fireball.

After Zangyack were finally defeated, the Gokaigers gave the Ranger Keys back to their rightful owners. It is presumed that Yusuke received his key and became Red Falcon once more.

The Liveman Ressha (ライブマンレッシャー, Raibuman Ressha) currently only exists as a sound on the ToQ Changer. 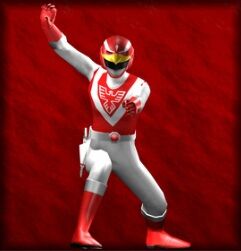 Yusuke Amamiya/Red Falcon: to be added

Red Falcon is among the vast pantheon of Rangers which are available in the mobile game "Super Sentai Battle Base".

Red Falcon appears with his team among all Sentai in the mobile game "Super Sentai Legend Wars".