Yukito is 21 years old at the beginning of Abaranger.

Yukito is a chiropractor before becoming AbareBlue.

Yukito's phlegmatic, anti-social personality comes from his past. When he was little, his father Souichirou Sanjyo, president of Sanjyou Corporation, tried to succeed him into taking over the company for the future. Yukito was forced to study 10 hours daily and was never given breaks. He wasn't even allowed to have any friends. The last straw that broke the father-son relationship was when Souichirou paid his girlfriend's family to move away while he was in middle school. Yukito never forgave him for that and claimed that he hated him. But in reality, he harbored a self-loathing towards himself for a long time which he understood with Ryouga's help after Ryouga visited Souichirou to recover the money Yukito previously returned to him.

Yukito also once mentioned to his father that while his greed in swindling people out of their money by demanding outrageous fees for his services makes him no better than his father, the only difference is that Yukito would never use money to manipulate people's minds and try to win them over.

TV STORY-Ep. 15: The Abare World is Just Demons Incidentally, it was because of the painful situation he previously had with his girlfriend, that during the final battle, Yukito would be the one to encourage Asuka to head into Dezumogevirus to rescue Mahoro, so Asuka would not have to suffer through the same painful experience that he went through

Yukito chooses to move into the Dino House with the others to avoid having to commute from Sapporo, the city where he lives. Because of his fame as a chiropractor he has a lot of connections and not only called in a favor to have government agents help him restore the injured neck of Bakuryu Brachiosaurus in his plan after it was injured by Giganoid 1: Fate.

Yukito has the agents investigate Mikoto Nakadai's past so Yukito can find something they can use to help save him, allowing the Abarangers to learn about Mikoto's tragic past.

TV STORY-Ep. 42: The Thing Hidden in the Abare Kid.

Yukito is forced to suck up his pride and disguise himself as a high school girl to work alongside Emiri to save the others that are trapped in Creative Messenger Mikela's catalog after he and Visionary Messenger Voffa are sent to Another Earth. Though they succeed, Yukito is embarrassed afterwards as Emiri had taken a picture with her cell phone camera.

In the epilogue, Yukito returns to his chiropractor business and the finale seems to imply that Yukito is in a relationship with Emiri which is confirmed later.

In the Dino Thunder episode Lost & Found in Translation, he was named "Kenny Yukito".

Yukito returns alongside Ryouga and Ranru to fight against Ginjifu Seijin Kazakku who turns into a crow when Dekarangers rush in and misunderstand the situation as the Abarangers are rampaging on city. Jailed temporary, the Abarangers are soon freed after Doggie discovers Ranru's camera caught on Kazakku disguised de-transformed. When being sent to get him, Yukito initially refuses to join so he can repair Doggie's back injury. He later joins Tekkan Aira, Hoji Tomasu, and Sen'ichi Enari to defeat the revived Genio by revealing a new weakpoint to defeat him. During the climax team-up, he teams up with Ryouga, Asuka, and Jasmine. On the last scene, he joins the team alongside Dekarangers (exclude the females for both team) to celebrate their victory of the battle.

Yukito's appearances in the "Versus Series", Abaranger vs. Hurricaneger and Dekaranger vs. Abaranger, are featured in the Super Sentai Versus Series Theater, hosted by the heroes of Tensou Sentai Goseiger. Hyde (Gosei Blue) also dresses as Yukito in the Abaranger cosplay.

Years later, Yukito fights alongside not only his own team but every single Sentai Ranger in existence against the Space Empire Zangyack when it attacks the Earth in the Great Legend War. After fighting against hundreds of Gormin and their Zgormin commanders. AkaRenger notices the fleet moving towards them so he gathers all the Rangers together and gives them the order to sacrifice their powers to wipe out the first invasion's armada.

Some time after Mikoto gives Gai Ikari (Gokai Silver) the Greater Power of the Abarangers, Yukito comes to them and reveals that GokaiOh can use the greater power as well. He is accompanied by Emiri who is now his wife, he persists that she is not an Abaranger despite her brief stint as AbarePink.

Yukito, alongside Ryouga and Ranru (AbareBlack and AbareKiller were absent), among the majority of the Super Sentai heroes, was caught up in the "Super Hero Taisen" incident which eventually resulted in the Super Sentai teams and Kamen Riders joining forces to defeat both Dai-Zangyack and Dai-Shocker. During the final battle, he is seen in the background fighting a Gormin.

Yukito arrives at the Spirit Base to give Torin the Super Sentai Zyudenchi. By channeling his Dino Guts into the Zyudenchi, it creates a time portal that allow the Kyoryugers to return to the present. After Ryouga is freed, Yukito fights with him and Ranru as the Abarangers, defeat Neo-Geilton and then work with the Zyurangers and Kyoryugers to defeat Neo-Grifforzar.

AbareBlue appears with his team among the first 38 Super Sentai who collectively empower Wild Tousai Shuriken King in its fight against the titanic Gillmarda, granting the Ninningers and Zyuohgers the power to perform the Zyuoh Ninnin Super Sentai Burst which destroys Gillmarda with the combined power of all 40 Super Sentai.

Yukito is a charismatic young man and the anti-hero of the group, who will help anyone but charges outrageously high prices for it. In fact, he asked Asuka for ¥400,000,000 (3,234,460.00 USD) in order to assume his role as AbareBlue. Asuka naively accepted this and promised to save and pay, much to Yukito's surprise. He comes off as really cold, as he keeps an emotional distance from his patients and has little patience. Despite this though, Yukito has a kind heart underneath, though he will never fully reveal his feelings.

As of his later appearances in Gokaiger and Kyoryuger vs. Go-Busters, Yukito has softened up considerably though his serious side remains predominant.

His skill as chiropractor is very useful in battle, because he can disable his opponents by touching their body and finding their weak spots through their bones, then finally striking the weak spot from their bones damaging them greatly. 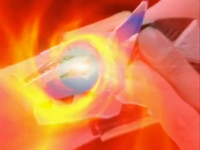 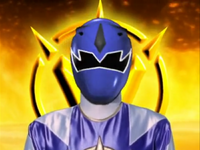 In this form, AbareBlue's fighting style is similar to a Triceratops, by running into four legs then charging at the enemy with his head.

The AbareBlue Ranger Key (アバレブルーレンジャーキー, Abare Burū Renjā Kī) is Yukito Sanjyou's personal Ranger Key and what became of his powers after he along with the rest of the 34 Super Sentai sacrificed their powers to end the Great Legend War.

This key along with the majority of the Ranger Keys were collected by the Red Pirates and later used by the Gokaigers. The AbareBlue Ranger Key was mainly used by Joe Gibken (Gokai Blue), who used it to fight as AbareBlue.

After Zangyack were finally defeated, the Gokaigers gave the Ranger Keys back to their rightful owners. It is presumed that Yukito received his key and became AbareBlue once more.

Yukito Sanjyou/AbareBlue: to be added

AbareBlue is among the vast pantheon of Rangers which are available in the mobile game Super Sentai Battle Base, with his Abare Mode being available as well.

AbareBlue appears with his team among all Sentai in the mobile game Super Sentai Legend Wars.