Yoko Usami (宇佐見 ヨーコ, Usami Yōko) is Yellow Buster (イエローバスター, Ierō Basutā) of the Go-Busters. She is a sharp-tongued and easily-tempered teenage girl. Her partner Buddy Roid is Usada Lettuce.

The youngest and the only female of the group. The three Go-Busters make their first appearance in Kaizoku Sentai Gokaiger vs. Uchuu Keiji Gavan: The Movie where they take on their predecessors' nemesis, Basco ta Jolokia, to make sure he didn't get the Galleon.

She gained incredible kicking and jumping power from an accident, and as such this is her Buster Power. Her powers have a trade-off however. Her weakness is that if she runs out of calories for her "inner battery" to burn, she will be unable to move. Thus, she compensates by eating lots of candy.

13 years ago, when Messiah was newly created, it trapped the scientists and Buddy Roids into a small room. Yoko was among the trapped, as her mother was one of the scientists. After the head scientist teleported the facility to a dimension in hyper-space, Yoko, Ryuji, and Hiromu, as well as the Buddy Roids, were left behind. The little girl broke down, distraught that she had lost her mother. It was here that Hiromu promised that he would bring their parents back.

TV STORY-Mission 2: A Promise Made 13 Years Ago

A copy of Yellow Buster was created by Filmloid as part of a fake Go-Buster trio.

Two Buglars were given the appearance of Yellow Buster by Sprayloid 2.

Yoko was caught up in the Super Hero Taisen incident, along with her teammates. She took part in the final battle, before being ejected from her Buster Machine.

While waiting for her teammates at a barbecue, Yoko discovered a small robot called Psycholon. After repairing him, Yoko acted as his protector from both Space Shocker and Madou. She helped him to break free from their control.

As her team failed to rescue Ryouga from Deboth, their next mission is to protect the Kyoryugers. They arrive where the Kyoryugers are and manage to escape from Neo-Grifforzer and Neo-Geilton as they split up. Later, Yoko and Amy fought Escape as she told them that Vaglass is part the plan of awaking Space War God Borudosu. Yoko let Amy escape to save Geki and Ryouga as she stays to fight Escape. She later meet up with her team, but they were too late as the Kyoryugers were brainwashed and enters the past to have the dinosaur extincted. Her team arrive at the Spirit Base as they inform Kuroki and Torin about the Kyoryugers' action. He then gives the Go-Busters a task to save Geki and Ryouga from Deboth, with Torin's assistance. As they arrive in the satellite, they were too late to save the Red warriors as they fought Deboth's Knights. Overpowered, they still continue fighting until J arrive. Much to their surprise, Jin appears as he reveals to them that he is also part of Vaglass' residual program as his data was stored in J. Her team fought back as they manage to destroy the satellite to restore the Dinosaur Sentai's Dino Hope. As Space War God Borudosu is awakened and the Dinosaur Sentais were having trouble fighting the monster, they were about to join, but Beet Buster gave them the Go-Busters Zyudenchi as this is his final thing to do before he disappears. They join the battle as they entered in Raiden Kyoryuzin and formed Tategami Raiden Kyoryuzin to finish off Space War God Borudosu.

Yellow Buster appeared with her team among the first 38 Super Sentai whom collectively empowered Wild Tousai Shuriken King in its fight against the titanic Gillmarda, granting the Ninningers and Zyuohgers the power to perform the Zyuoh Ninnin Super Sentai Burst which destroyed Gillmarda with the combined power of all 40 Super Sentai.

Yoko joined the Super Sentai Strongest Battle as a member of Animal Lover Team. It’s unknown whether she participated in any of the matches, but her team lost the competition either in the first round against the Sports Team offscreen or won against them and lost in the second round against Leader Team offscreen.

Yoko is somewhat boisterous and tends to say things without thinking. She is also not afraid to say things as she sees it. She also has a strong dislike for Hiromu, to the point of calling him a "siscon", and thinks that he'll be a hindrance - which gradually goes away.

As Yellow Buster uses the GB Custom Visor, Usada Lettuce's data transfers and projects onto Yellow Buster's suit to form a powerful armor based on the "protector" prototypes. Usada and Yellow Buster, to a degree, are combined and can generate airborne force-fields on which Yellow Buster can jump onto and from. Yellow Buster/Usada gain the Rapid Kick (ラピッドキック, Rapiddo Kikku) attack which is a super-charged full body projectile and/or drill attack. 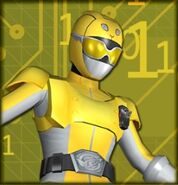 Yellow Buster is among the vast pantheon of Rangers which are available in the mobile game Super Sentai Battle Base, with her Powered Custom being available as well.

Yellow Buster appears with her team among all Sentai in the mobile game Super Sentai Legend Wars.