RangerWiki
Register
Don't have an account?
Sign In
Advertisement
in: In Space, PR Villains, Evox Virus Army,
and 17 more

"And we’re here for one reason and one reason only."
―Psycho Yellow's first words.[src]

Astronema creates the Psycho Rangers, including Yellow, from individuals she destroys and uses as raw materials. Dark Specter gives her the ability to do so. After "making" them. They become staunchly loyal to their "mother." Psycho Yellow is based on Ashley Hammond's brain wave patterns and automatically knows everything about Ashley, her weapons and strategies. She prefers operating alone to fulfill her own goals and utilizes the Psycho Sling and has a spider/hornet-like monster form.

Psycho Yellow is first seen in her true, spider-like monster form on Onyx during Andros' visit there in disguise, among many other monsters. Andros does not interact with her at that time.

Psycho Yellow, along with the other Psycho Rangers, attack Angel Grove disguised as the Yellow Space Ranger, causing a great deal of destruction before the real Space Rangers arrive. During the battle which ensues, they reveal themselves as the Psycho Rangers and nearly defeat the Power Rangers before Zhane arrives on his Silver Cycle with his bike having the firepower to make them flee.

During one of the battles, the Psychos captures the Mega Voyager and hide it on a planet. They use it as bait to lure the Space Rangers into a trap. When the Rangers arrive to recover their Zords, they discover that Psycho Yellow has turned herself into a computer virus and inserted herself into the Zord's computers thus controlling it completely. She is defeated when the Psychos begin fighting amongst themselves and attack the Mega Voyager, forcing her to evacuate. She tries to refuse to fight but Psycho Red brainwashes her into fighting him and they combine powers for the Full Power Blast. However, the Rangers use the energy to fire a supercharged Mega V3 Missile Mode which vaporizes the Space Rangers.

The Psycho Rangers return in ghost form but are unable to attack the Rangers when they are in Secret City.

TV STORY-Ghosts in the Machine

Deviot retrieves the data cards with the Psycho Rangers on them a year later and resurrect them to serve Trakeena to capture and kill the Galaxy Rangers. They send Psycho Yellow and Psycho Black after Damon and Maya who they easily capture. Later, The Space and Lost Galaxy Rangers destroy Psycho Yellow for good, using the combined power of the Spiral Saber Booster Mode, Quadroblaster and the Lights of Orion Power-Up Mode attack.

Andros and the Space Rangers eventually locate the Psycho Rangers, and a battle ensues. Psycho Yellow battles and defeats the Blue Space Ranger. When Karone is blasted by Psycho Green, Psycho Yellow and her teammates retreat to save her. Psycho Pink knocks out Psycho Green and Karone tells them she must kill them so that they may be reprogrammed. Psycho Yellow believes she wants to turn them into different people, and the others agree until Psycho Pink, who has chosen the name Nokrea, agrees to allow Karone to kill her.

Karone later carries the unconscious Andros out of the Psycho Rangers' spaceship, telling the Space Rangers that she killed the Psycho Rangers and reprogrammed them. However, in truth Karone could not kill the Psychos, instead destroying their data cards so that they could remain who they are. Karone, having been Astronema for many years, believed they could reclaim their humanity the way she did. Psycho Yellow, who chose the name "Yellow", watches over the imprisoned Psycho Green. She regroups with her teammates at the ship's controls and sets off for adventure.

Yellow is shown in archive footage along with the other Psycho Rangers in Scrozzle's database, when the are looking for a past villain to revive with the Reanimizer and come across Psycho Red, Robo-Blaze deems that Psycho Red is the perfect candidate, Robo-Roxy is not sure. She recalls that Psycho Red’s obsession over Andros led to the Psycho Rangers' destruction as footage of the Psycho Rangers being destroyed by both the Space Rangers and Galaxy Rangers is shown. Blaze is disgusted and wants to use the Reanimizer to revive all the Psycho Rangers. However, Scrozzle has the resources for resurrecting only one, as a result the villains follow search in Ryjack's collection.

Psycho Yellow was analytical, logical, and calm, mostly taking things in stride but being careful to withhold judgement until she better understood a situation. She could be quite playful when testing out weaponry, indicating that she had a passion for building new weapons and technology. However, she was not very trusting as she may have felt love for Karone but was intelligent enough not to trust her at the time. Yellow possessed the most disregard for her sense of identity, refusing to take an individual name beyond her Ranger color but was easily the most objective and intelligent of her team. 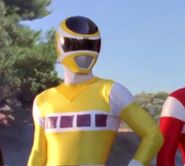 TV STORY-A Rift in the Rangers