Yamato Tribe Prince Geki (ヤマト族プリンス ゲキ, Yamato Zoku Purinsu Geki) is TyrannoRanger (ティラノレンジャー, Tirano Renjā), the leader of the Zyurangers, and Burai's younger brother. He is known as the "Warrior of Justice". He is 24 years old (43 years old in Gokaiger and 45 years old in Kyoryuger vs. Go-Busters).

TyrannoRanger appeared as part of a conference of the first 38 Reds led by Red Falcon, whom addressed the Ninningers and Zyuohgers as the greater Super Sentai pantheon intervened to save them from defeat at the hands of the titanic Gillmarda. Empowering the Combination Nin Shuriken to form Wild Tousai Shuriken King, the first 38 Super Sentai further imbued their successors with the power to perform the Zyuoh Ninnin Super Sentai Burst, destroying Gillmarda with the combined power of all 40 Super Sentai. Doubutsu Sentai Zyuohger vs. Ninninger: Message from the Future from Super Sentai 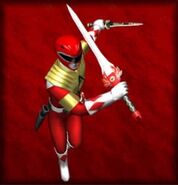 TyrannoRanger appears with his team among all Sentai in the mobile game Super Sentai Legend Wars.

Retrieved from "https://powerrangers.fandom.com/wiki/Yamato_Tribe_Prince_Geki?oldid=684868"
Community content is available under CC-BY-SA unless otherwise noted.