Xander is an Australian who has moved to the United States. He was bullied mercilessly about his accent when he first arrived and was often ostracized. Therefore, he understands and sympathizes with loners, like Nick. He liked riding his skateboard and showing off, using his charming smile to his advantage whenever possible. When faced with trouble, Xander will always attempt to talk his way out of it, which has done nothing to phase any supernatural creatures.

When working at the Rock Porium, Xander is more likely to assign work to the other Rangers instead of actually working himself. His overconfidence and ego have gotten him into danger several times, but he usually admits when he is wrong in the end.

When he had a large pimple on the end of his nose, Xander felt that his "perfect profile" would be compromised. He later took Clare's defective Perfection Potion to restore his nose. Though it got rid of the pimple, he started turning into a tree. With Vida and Clare's help, he was able to be restored to his human form.

Xander is having trouble following Daggeron's training techniques, so Daggeron sends the Rangers to the Shalifar dimension on a morpher-less training mission to find a ticket to get back home.

Xander and the Rangers get trapped in an alternate reality where the Rangers never existed. They go to the Tribunal of Magic for help, and later undid everything and gained new armor.

After the final battle against the Master, Xander was promoted to manager of the Rock Porium.

In Operation Overdrive, Thrax, son of Rita Repulsa and Lord Zedd, determined to find the jewels of the Corona Aurora, gathered all four villain factions, Flurious and the Chillers, Moltor and the Lava Lizards, Miratrix and Kamdor, and the Fearcats, Mig and Benglo. Xander, Adam Park, Tori Hanson, Kira Ford and Bridge Carson would be called upon by the Sentinel Knight to take the place of the Operation Overdrive Rangers when they lost their powers as Thrax's alliance damaged the Morphing Grid.

Xander and the Retro Rangers go to a warehouse in Angel Grove where they encounter Chillers while they tried to find Alpha 6. Xander steps forward, ready to put his plan into action, and introduces himself. It does not go well as Xander is knocked aside. He gets up and the five veteran Rangers defeat the Chillers.

Later, Alpha 6 managed to repair the Morphing Grid and give the Overdrive Rangers their powers back. Both Ranger teams confronted Thrax's Alliance in a final battle, Xander fought alongside Dax Lo and Will Aston, the Blue and Black Overdrive Rangers, against Mig and Benglo, who they managed to defeat. The Sentinel Knight then appeared and used the Sword Excelsior to destroy Thrax, and the other enemies to fled. When the Rangers said their goodbyes, he offered everyone a 10% discount at the Rock Porium.

Xander and the other Mystic Rangers returned as part of the army of Legendary Rangers that helped the Mega Rangers defeat the Armada once and for all, fighting in a huge battle against hundreds of X Borgs and dozens of Bruisers.

When Preston Tien read The Encyclopedia Of Magic & Spells, it contained a small bio on Chip Thorn and the others Mystic Rangers. Xander was mentioned as one of the magicians who defeated Octomus, the Master.

He was shown along with the other Mystic Rangers when the villains were looking for a past villain to revive with the Reanimizer, and came across Koragg The Knight Wolf.

When events set into motion by Lord Drakkon caused the timeline to split into pocket universe, each anchored on a powerset, the Mystic Rangers were split off into their own pocket universe. Green Mystic Ranger eventually received Zordon's call through the Morphin Grid and was among numerous Rangers who rallied to his pocket dimension led by the Quantum Ranger for the last stand against Lord Drakkon, reunited in the Command Center.

Xander, along with the other Rangers morphers, are upgrade by Doctor K. He and the other Mystic Rangers drive the Titan Megazord and are among other Rangers to be teleported to the moon in the World of the Coinless for the fight against Drakkon and his Ranger Sentries, led by Jason Lee Scott.

During the battle on the moon in the World of the Coinless, the Mystic Rangers, in the Titan Megazord, are seen regrouping with Jack and Kira, however they're attacked by Serpentera. He's also seen briefly in Tommy Oliver's vision when an alternate Kimberly throws a Green Chaos Crystal at him.

Xander along with the other Mystic Rangers are among all the Ranger teams which appear in the Korean-developed mobile game Power Rangers Dash.

Xander was charming and gentle worker in Rock Porium who's loyal to his boss, Toby. He enjoys talking and flirting with girls and uses his charm, but he's a bit overconfident at times. He enjoys riding a skateboard. He tried to show himself as good leader, but he's bit lazy. Xander is capable of doing every business, with necessity, but he needs to be convinced. He can find compromises and will never bear the role of tough accuser.

As the Green Mystic Ranger, Xander wields the power of earth. His weapon is the Magi Staff Axe. He also owns a Mystic Racer. His Titan form is the Mystic Minotaur, which makes up the bulk of the Mystic Dragon and Titan Megazord formations. With his Legend powers, he can fuse with Chip, Vida, and Madison to form the Mystic Lion.

The Mystic Minotaur is the Bull-like Titan form of the Green Ranger. Forms the majority of both Titan Megazord and dragon. Largest Mystic Titan. 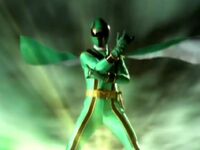 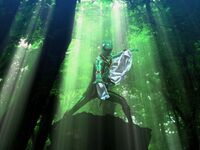 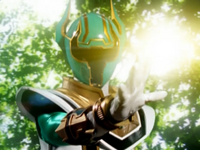