The Wrecker Zord is Nate Silva's personal Zord in Power Rangers Beast Morphers. Its driver interface does not require a Beast Bot, just a pilot utilizing the Striker Saber.

Piloted by Beast Morphers Gold, the Wrecker Zord’s vehicle mode resembles a giant crane truck. Wrecker Zord is armed with cannons mounted on its side and can also extend its crane arm to punch or hook an opponent.  The crane carries 3000 meters of steel cable in its crane arm and is strong enough to lift a giant enemy off its feet and into the air before tossing it away.

In light of Nate and Steel unexpectedly becoming the Gold and Silver Rangers, the Wrecker Zord and Jet Zord were designed to act as their personal Zords.

With the Racer Zord pinned down by Gigatronics deployed by Antennadrone, and Ravi and Zoey being too busy fighting Antennatron to help, Nate and Steel summoned their Zords and changed them into their Mantis and Scarab Modes to steal their fuel with the two Zords' Morph-X Hyper Drain. The Wrecker Zord then flung a Gigatronic into the air to explode and the Jet Zord crushed a Gigatronic until it exploded, allowing Devon to destroy Antennadrone.

TV STORY-Tools of the Betrayed

After destroying Spiketron and his Tronics on Halloween, Nate and Steel realized that the others were overwhelmed by Spikedrone and the second Delta Model so they summoned their Zords. Seconds before Ravi would have been smashed by the Delta Model in the Wheeler Zord, the Striker Zords arrived and blasted both Gigadrones back with their cannons before the Jet Zord decimated them with its Rapid Blast. The Wrecker Zord then bashed Spikedrone with its crane arm before picking it up and swinging it around multiple times before Ravi recovered and ordered Nate to release it. Nate obliged and the Rocket Storm obliterated Spikedrone. With just the Delta Model left so with the Chopper and Racer Zords disabled due to the Beast-X Megazord having earlier been ripped apart and Devon's Zord shot with energy arrows, Nate changed his Zord in Battle Mode. It then overwhelmed the Delta Model with its Crane Crash before latching onto its shoulder and electrocuting it. With the Delta Model helpless, the Wrecker and Jet Zords used their Jet Zord Collider Crash to obliterate the final Gigadrone.

After destroying Burnertron, Nate and Steel summoned their Zords to form the Striker Megazord which destroyed Burnerdrone, having been allowed to do that by Devon as an apology for his earlier evil behavior, and put out the fire it caused on a Morph-X Tower by smothering it with the Wrecker Zord's crane arm.

Whilst the main three Rangers were fighting Shockatron, the Striker Zords were forced to deploy against Shockadrone. The Wrecker Zord changed into Battle Mode and took on Shockadrone directly with the Jet Zord providing air support but both were overwhelmed. The Racer Zord then deployed to help fight and the three Zords turned the tide against Shockadrone and the Racer and Jet Zords teamed up to destroy it. However, its goal was ultimately to distract them from Vargoyle's mission to put Memory Pulsators on towers to erase their memories of being Rangers which succeeded.

In order to lure the Rangers away from the van of Mega Transporters, Blaze ordered the creation of another unnamed Gigadrone which prompted the deployment of the Striker Megazord, Chopper Zord and Racer Zord with Roxy ambushing Ravi. With the Chopper Zord providing air support, the Zords were overwhelmed until the Striker Megazord restrained its arm which allowed the Racer Zord to finish it off with the Cheetah Hyper Strike. However, in spite of its destruction and Avatar Roxy's death, Blaze was able to steal the van of Transporters and use them to steal away an entire Morph-X Tower to the Cyber Dimension.

The Wrecker Zord combined with the Jet Zord and components of the Beast-X Megazord combined into the new Beast-X Ultrazord for their invasion of the Cyber Dimension. It destroyed an army of Gigadrones but the Ultrazord and all of its components, including the Wrecker Zord, were reduced to piles of scrap by an energy blast from Evox's new body with only the Racer Zord remaining intact.

After Infernodrone's destruction at Christmas, which was seemingly the end of Scrozzle as well, the Wrecker Zord went into storage for at least three months due to the assumed elimination of Evox's forces.

With Zoey and Steel fighting Drilltron 2.0, the Wrecker Zord, Racer Zord, and Wheeler Zord Gorilla Mode deployed to the hole where Drilldrone 2.0 drilled down to some Morph-X. They decided to send the Racer Zord down the hole on the Wrecker Zord's crane arm with the Wheeler Zord acting as the Wrecker Zord's protection in case of attack (since it couldn't change into Battle Mode with its crane arm in use). Two Gigatronics were fired up to the surface by Drilldrone 2.0 so the Wheeler Zord fought them and succeeded with some minor failures. However, after the Racer Zord attached Drilldrone 2.0 to the end of Nate's hook, the Gigatronics got through the defenses by blasting the Wheeler Zord and jumping over it. However, the Jet and Chopper Zords arrived and knocked them back with their Rapid Blasts before they could kill Nate. After the Gigatronics were destroyed by the Wheeler Zord's Rocket Storm and the Racer Zord's Cheetah Strike, Nate was amazed to see the Gigadrone that he had fished out of the hole so Steel flew in, changed his Zord into Scarab Mode, and grabbed it before flying into the city. The Wrecker Zord followed and changed into Battle Mode before overwhelming the Gigadrone with its crane arm and destroyed it with the Bazooka Blast. It then rescued the Racer Zord from off-screen shortly thereafter.

The Wrecker Zord was part of the Striker Megazord when it, the Chopper Zord, and the Wheeler Zord Gorilla Mode went into battle against Digidrone and later Controladrone.

The Striker Megazord initially tried to break into the building that was Boxertron and failed. The Wrecker Zord later deployed alongside the entire fleet of Zords (minus the captured Racer Zord) and formed the Beast-X King Ultrazord.

Whilst Ravi and Zoey were recovering from Ryjack's poison and Devon and Captain Chaku were fighting golden Vargoyle, Nate and Steel deployed in their Zords to defeat yet another unnamed Gigadrone. Nate immediately turned his Zord into Battle Mode and initially overwhelmed it but the Gigadrone and Wrecker Zord were perfectly matched in terms of firepower, their blasts cancelling each other out despite the Jet Zord's Rapid Blast being constantly used. After Vargoyle's death, they combined into the Striker Megazord and destroyed the Gigadrone with the Striker Hyper Blast.

The Wrecker Zord was seen as part of the Ultrazord when it deployed to fight Ryjack who it soon killed.

Amidst a battle between the revived Sledge, Snide, Sledge's Crew, the Dino Charge Rangers, and the Beast Morphers Rangers, Scrozzle decided to exploit this by sending a fourth unnamed Gigadrone to Earth to break open a tower with its magnetic powers and drain the Morph-X. The Wrecker Zord Battle Mode arrived and knocked it down and, whilst the Jet Zord's Rapid Blast kept it down, the Bazooka Blast and Beast-X Hyper Strike destroyed it.

After defeating Clawtron, Nate and Devon went to help Steel in battle against Clawdrone. Nate changed his Zord into Battle Mode whilst Devon arrived on the Racer Zord and Beast-X King Zord Battle Mode and stunned the Gigadrone with a Proton Blast before Nate and Steel annihilated it with the Jet Zord Collider Crash.

The Striker Megazord was used to fight against Evox in Omegadrone and was decimated when the Gigadrone explosively overloaded. However, it was rebuilt by the end of the day.

The Wrecker and Jet Zords were used to form the Beast-X King Ultrazord but they were defeated but still operational before Evox/Venjix was obliterated once and for all by the Beast-X King Megazord.

With Evox and his army gone and Scrozzle in jail, the Zords were probably on standby should they ever be needed again.

The Wrecker Zord Mantis Mode is the Wrecker Zord's animal form, resembling a mantis. It uses its head to toss enemies into the air and also has the ability to collect Morph-X from its opponents. It is formed by typing 'WRZM' into the keypad.

6,000,000
The Wrecker Zord Battle Mode is Nate's personal Megazord. Its crane arm can extend to significant lengths to strike or grapple with an opponent (in an attack he dubbed the Crane Crash) before sending an electric pulse down the arm's length. It is formed by typing 'WRZB' into the keypad. Its primary weapons are the two swords mounted on its legs which can be converted into the Striker cannons.

This Zord has its own personal finisher called the Wrecker Zord Bazooka Blast where it inverts its swords into the Striker cannons, holds them, and charges them up. It would then lock onto the enemy and fire, unleashing at least five big yellow lasers capable of destroying Gigadrones.

With the Jet Zord, it can perform a joint finishing move named the Jet Zord Collider Crash where the Wrecker Zord catches the target with the crane arm as the Jet Zord lands on the extended limb and uses it as an airplane catapult to launch itself straight into the Gigadrone or enemy, obliterating them on impact. 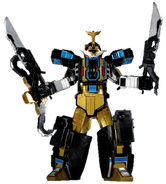 A list of combinations that include the Beast Wrecker Zord: