The Wolfblades are a trio of werewolf-like monsters that serves as the primary antagonists of the two-part episode "Shimazu Returns".

The Wolfblades are ancient creatures who used to terrorise the villagers thousands of years ago. They were summoned by their master Shimazu to battle the Power Rangers. They were first seen chasing civilians around outside of Blue Bay Harbor. The Red, Yellow, Blue and Green Rangers tried to battle, but these monsters were more then a match for them, right before they could finish them off, the Thunder Rangers came to the rescue, firing on the Wolfblades with the Crimson Blaster and forcing the trio to retreat. They later returned and the Red, Blue, Yellow and Navy Rangers did battle with the Wolfblades, with Shimazu adding them in battle, all of them were too much for them, and they were forced to retreat. While the Red Ranger does battle with Motodrone, the four Rangers did battle with the Wolfblades, they land a major beat down on the Yellow Ranger and were about to land a finale strike until Tori blasted them with her Ninja Blaster, they then did the samething with the Blue Ranger until being blasted again by the Yellow and the Navy Rangers, the Wolfblades were still more then a match for the Rangers, Shimazu use his whistle to make them more and more aggressive, but when he used the whistle the third time, it made the Wolfblades fight each other, allowing the Ninja Storm Rangers to finish them off with an almighty energy slash into thier bodies. The victory was short lived when the Wolfblades combined and formed a massive three-headed wolf monster called: The Wolfblade Conglomerate.

The Rangers summoned the Storm Megazord and Thunder Megazord to battle the monster, but they were out matched. They then formed the Thunderstorm Megazord and used the Lion Blaster attack on the Wolfblade Conglomerate, but even it wasn't enough and was left unscratched. The monster then jump and made a complete beatdown on the Megazord, forcing the Rangers to retreat which made the Wolfblades seperate and retreat, Shimazu then later returned with the Wolfblades and noticed the Samurai Star Chopper. Determined to not let the Green Samurai Ranger find out about the secret weapon, he had the Wolfblades form the Wolfblade Conglomerate to take out the Samurai Star Chopper, although Cam manages to escape. He then sent it into the city where it did battle with the Hawk Zord, Lion Zord, Dolphin Zord, Crimson Insectizord, and Navy Beetlezord. It was hit by the Flame Attack. Lion Tornado Blast, Dolphin Water Wall, the Crimson Insectzord's cannon blasts and the Navy Insectzord's antlers but none of these the Rangers had the upper hand, but they were quickly out match, Cam came in and unleashed the new Mammothzord. The Ninja Rangers form the Thunderstorm Megazord to battle this monster and had the upper hand with the Serpent Sword and the Ram Hammer and Turtle Mace combination. They then combined with the Mammothzord to form the new Thunderstorm Ultrazord and destroy the Wolfblade Conglomerate once and for all. Shimazu Returns

They are later seen in the final battle along with their master after Lothor opens the Abyss of Evil. Storm Before the Calm

They returned in Thunder Storm (Dino Thunder team-up with Ninja Storm) but without Shimazu this time and were destroyed once and for all by Trent and Cam. Thunder Storm

The Wolfblades are violent creatures that will attack anyone in their paths. Despite this however they seem to be extremely loyal to Shimazu. They also growl like werewolves do and whine like dogs when they’re about to be destroyed. The Wolfblade Conglomerate retains its violent nature and loyalty to Shimazu like the Wolfblades before hand. 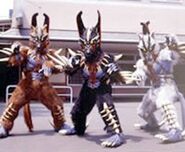 The Wolfblade Conglomerate
Add a photo to this gallery

Retrieved from "https://powerrangers.fandom.com/wiki/Wolfblades?oldid=900433"
Community content is available under CC-BY-SA unless otherwise noted.