Will was recruited by Andrew Hartford as a person who can find and defuse any traps. Used to working alone, he was initially annoyed at having to work in a team and deliberately went off on his own in the Atlantis mission, getting frustrated every time he screwed up as a result; he realized he needed the team when Mack saved his life.

TV STORY-The Underwater World Will showed his corrected thinking at the idea of teamwork when trying to help Tyzonn learn the same lesson in Just Like Me.

TV STORY-Just Like Me His connection to the team can be seen in Ronny on Empty, where he struck out on his own and risked his life to rescue Ronny, who'd been captured saving him.

In One Gets Away, Will's attempt to return the third jewel to the Hartford estate ended in failure when Kamdor and Miratrix ambushed him and stole the jewel. In an attempt to salvage the situation, he resigned as a Ranger. However, he wasn't able to ignore his desire of helping his teammates keep the world safe that easily, and with help from Spencer who convinced Andrew that the Black Ranger wasn't in the wrong, Will was welcomed back to the team.

His spy skills have made him a valuable asset; in Both Sides Now, during the search for the Hou-ou Bird, Will pretended to defect to the side of evil in order to retrieve the Bird from Kamdor.

As a result of his infiltration mission and the loss of the third jewel, Will developed an enmity with Kamdor. In Two Fallen Foes, this was brought to a head; Kamdor, who had been insulting Will as a constant failure, faced him in a battle over the Golden Plate, and Will was able to personally destroy him.

At the end of the series, Will decided to go back to being a spy, except that he will now train a team to work with.

Will and the other Overdrive Rangers returned as part of the army of Legendary Rangers that helped the Mega Rangers defeat the Armada once and for all, fighting in a huge battle against hundreds of X Borgs and dozens of Bruisers.

Will as Black Overdrive Ranger, appears in the app videogame Power Rangers Key Scanner, among various other Rangers teams.

Will along with the other Overdrive Rangers as well among all the Ranger teams which appear in the Korean-developed mobile game Power Rangers Dash.

Will enjoys any chance to prove his skills against sophisticated security devices. He is also a suave ladies man, à la a younger version of James Bond, who appreciates the finer things in life. He tries to maintain a cooler-than-thou edge, making him the only Ranger not to be excited about Halloween in Ronny on Empty, as he considered it "kid's stuff".

He also prefers to work alone, rather than working with his teammates. Will is bit a skeptic and he didn't get used to perceive anything at once. He considers a new task as a chance to show himself. However he is able to work effectively. He also possess a big sense of humor. Will is notable for his unusual moves, workarounds, dodgy colorful speech and meaningful smile. His fight style resembles brutal component without lack of speed and agility. 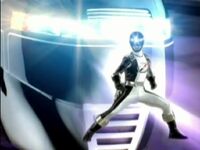