The End of the Power Rangers

The Wild Force Megazord is the combination of the Wild Zords.

The Wild Force Megazord was introduced when the Rangers needed to fight off the Barbed-Wire Org. Using the cry of "Wild Zords, descend!" the Rangers raised their Crystal Sabers to the sky, and the Wild Zords ran down an energy strip from the Animarium to the Earth below.

Then, joining their Crystal Sabers in the center in a star formation, the Rangers shouted, "Wild Zords, combine!" On this, the Bison would open a lid compartment (actually its quadruped torso) and the Lion would become the main torso while the Shark and White Tiger Wildzords became the arms (which looked somewhat like the MMPR Ninja Megazord's Arms). The Eagle would perch itself atop the Lion's head, and all four Zords would rest within the opened Bison's torso. As the Rangers leaped into a cockpit that formed within the Eagle, they would place their Crystal Sabers within consoles of the same shape.

On that note, the Rangers would shout, "Wild Force Megazord!" (Sometimes, but not all the time, Cole would say, "Awaken!" beforehand) and the Bison's torso would swivel outward to become the Megazord's legs. Then the Eagle would fold its wings in, assimilating itself into the Lion's torso, and the main head (which looked somewhat like the Orion Galaxy Megazord's main head, but its horns were not as elaborate) would rise from the rest of the combination Zord, which would then strike its final pose.

"Shark Surge!" and "Tiger Fury!" are usually used by this Megazord, and sometimes a sword formed from the Shark Zord's fin is also used (called the Fin Blade), but the noted attack for the Megazord is the "Wild Force MegaRoar", which looks somewhat like a rainbow of lasers shot from the entire Megazord's superstructure, a silhouette of all the separate Wild Zords encased within the attack. 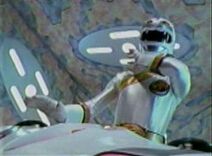 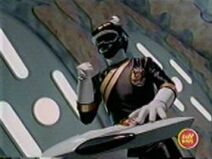 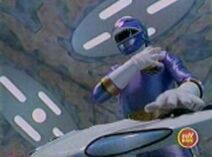 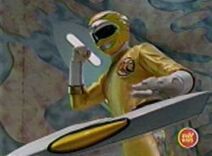 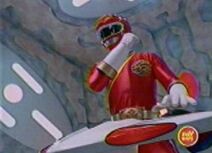 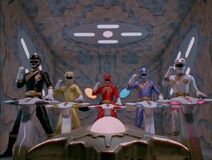 Over time, the Megazord would not be enough to defeat its foe, so new auxiliary Zords were introduced.

When Alyssa summoned the Elephant Zord, the Megazord gained this mode. In order to activate, the Elephant Zord's trunk straightens up as the main head of the Zord separates from both the torso and legs, which become the hilt when the Zord's trunk raises up, transforming into a makeshift sword blade and point. The main head of the Zord is the shield.

The finishing move for this mode is called "Pachyderm Crusher", where the Megazord raises the Elephant Sword high above its head. The sword glows with power and curves itself into an energy whip, which the Megazord cracks and uses to destroy its enemies with a final slash.

After Max, the Blue Ranger, summoned the Giraffe Zord (also called the Spear of Pardolis), the Rangers were able to use the Wild Force Megazord Spear Mode. In this mode, the Shark Zord disconnects and the Giraffe folds its hind legs to the back and its forelegs to the front. Its head also morphs into a silver spear, which replaces the Shark Zord as the right arm of the original Megazord.

The finishing move does not have a name, but the Rangers do shout, "Giraffe Spear—fire!" On that command, the Giraffe's head is shot from his long neck and transforms into a flaming energy blade bullet that impales its target and usually destroys it.

The Black and Polar Bear Zords were introduced after Taylor, the Yellow Ranger, helped a group of twin boys find the energy seeds that would allow them to reveal their true forms. The first time, the Wild Force Megazord used the "Double Knuckle" mode, where the Bear Zords would replace both the Shark and White Tiger Zords as the Megazord's arms. In this mode, the Rangers could shout the word, "Double Knuckle—Bear Blasters!" where the Megazord shot a combo blast of fire and ice beams from the cannons that protruded from the Bears' mouths.

In the next episode, it was revealed that the Bears had overloaded the Megazord, because the Red Lion Zord's power was depleted trying to hold the new mode together.

When Princess Shayla discovered that the only way to save Merrick from Zen-Aku's curse was to shut down the Predazord, Danny's Bison Zord sent the Rhino and Armadillo Wild Zords to help. With these Zords, the Rangers formed the Wild Force Megazord Striker Mode.

The Rangers can use the "Final Strike" in this mode, where the Armadillo unlocks itself from its compartment, and the Megazord kicks the separated Armadillo Zord like a soccer ball at its target. The Armadillo spins into a ball which blurs itself and becomes the illusion of the soccer ball, before slamming into its target and eliminating it.

The Wild Force Megazord has only used this mode twice. In the matter of torso and legs, the Lion, Eagle, and Bison still retain the main body form, while the Shark & Tiger Zords were substituted by the Hammerhead Shark & Wolf Zords, which become the arms that the Shark and Tiger usually serve as. During its debut, it also wielded the Armadillo Zord as a weapon.

The Shark and White Tiger Zords are replaced by the Giraffe and Wolf Zords.

After Master Org had transformed the headstone of his former incarnation (Dr. Viktor Adler) into a virtually indestructible Org (due to the fact that it was empowered by the spirits of Orgs who had perished three millennia ago), the Deer Wildzord had revealed itself, but refused to help the Rangers. Merrick believed that the Deer Zord wouldn't help the team because it felt it had been forgotten when the Animarium lifted off from Earth. Animus told Princess Shayla that only the Deer Zord could capture the vengeful Org spirits that empowered Tombstone Org, and it would help only if she sang her song about nature (tentatively entitled "Shayla's Song", performed by Ann Marie Crouch). With the Deer's help, the Wild Force Megazord gained a Clutcher Mode when the Deer Zord became the left arm and used the bubble wand capturing the org and freeing the other spirits.

The Shark Zord is replaced by the Giraffe Zord, while the Elephant Zord's head is attached to the White Tiger Zord.

Retrieved from "https://powerrangers.fandom.com/wiki/Wild_Force_Megazord?oldid=469379"
Community content is available under CC-BY-SA unless otherwise noted.