The wolf-like king and the most evil of the western Ashu tribe, sealed long ago with the rest of his tribe. Ouga was sealed within the mountain by Eiji's ancestors until Rei released him. He seeks and intends to eliminate Eiji claiming that his mother, Kei, who Ouga knew since they were young, cannot complete her travel to the other world with Eiji, the living proof of her "sin", still alive.

Ouga's Ashu soul is an "Absorbing Soul" which allows him to absorb life from the surrounding life forms to heal his wounds and perform the technique "Hundred Demons Heat Haze Reflection" to create copies of the Boukenger and attack them. After a harsh battle, Ouga enlarges himself and attacks only to be destroyed by DaiTanken's Bouken Flash. Eiji attempted the Ashu Soul Vanishing, but Ouga's remains surrounds Eiji, trapping him within a dimensional rift while turning his body in the real world to stone.

Posing as Kei, Ouga intended to make Eiji his prisoner, only Eiji wanted to return to his friends. Ouga refused to accept this, discarding his illusion to kill Eiji. But Kei managed to recreate Kando's shakujo for Eiji to use on Ouga, sealing him with the Ashu Soul Vanishing technique. 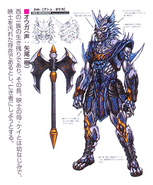