Later, Warrior Mask later stole a new weapon that could transform objects into sand. His ultimate plot was to take this weapon into space and fire it changing Earth into a lifeless planet. In order to build a satellite that could utilize this weapon, Warrior Mask took Doctor Kudo, the lead scientist on the project, hostage. In order to force Kudo to do their bidding, Warrior Mask had his minions kidnap the doctor's son, Koichi Kudo. During their battles against Warrior Mask, Akira Shinmei was driven to avenge the death of his colleagues at the Touhoku branch, but was reminded by Tsuyoshi Kaijo that their primary goal was rescuing Kudo and his son.

Warrior Mask is a ruthless and brutal warrior who has no hesitation in taking human life. Exceptionally cruel, he is willing to use kidnap and torture to coerce others to do his bidding.

Warrior Mask is voiced by the late Akira Shimada. 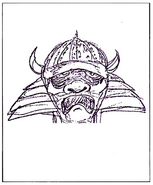