Juuki is created to cause damage to the city by destroying buildings with its bite, using it to attack a restaurant the four younger Tatsumi siblings were dining at and causing a huge fire in the process from its destruction. After escaping the building with Matoi's help GoGoFive deal with it quickly with the Life Bird; but Pierre ends up using a new "Golem Card" created from a fragment of Magma Golem to revive it as the giant Golem Juuki. It causes slight problems to the Grand Liner before it is eventually stopped.

When GoGoFive is sucked into Ghost Saima Hell by Salamandes, Golem Juuki was one of the army of Psyma Beast ghosts summoned by Spiritworld Guard Psyma Chaos to attack them until his staff was destroyed, leading to the Psyma Beasts to rampage against everyone. When GoGoFive find a portal back into their world with assistance of their mother, Golem Juuki follows alongside Chanbaano and Solgoil and is resurrected as a giant ghost once again. The team use the Grand Liner to destroy him once again with the Grand Storm sending him and Chanbaano, back to Ghost Psyma Hell (with Solgoil destroyed shortly afterwards with Max Victory Robo).

In its original form, it possesses a second dragon-like head on its right hand which can bite into any object creating massive structural damage instantly and causing fracture and destruction within.

After becoming Golem Juuki, this hand is replaced with a hand with huge knives that act as claws, his back spikes turn into a large fin, and his head becomes more monstrous looking. 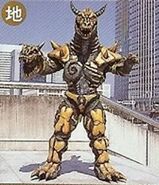 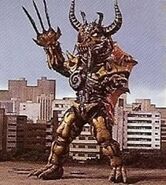 Golem Juuki
Add a photo to this gallery

Retrieved from "https://powerrangers.fandom.com/wiki/Violent_Food_Saima_Beast_Juuki?oldid=1033347"
Community content is available under CC-BY-SA unless otherwise noted.