Vida was ready to accept her destiny and magical powers, although she hated her chosen color.

Vida gets turned into a vampire and served Necrolai, until Chip was able to remind her who she was and broke the spell.

Vida and the Rangers gets trapped in an alternate reality where the Rangers never existed. They go to the Tribunal of Magic for help and they later undid everything and gained new armor.

By the end of the series, Vida had apparently gotten over her dislike of her chosen color, having pink hair bangs in some scenes (sometimes magenta hair bangs) and in the end, she dyed all her hair that color which similar to Nadira's pink hair style color from Power Rangers Time Force.

Vida and the other Mystic Rangers returned as part of the army of Legendary Rangers that helped the Mega Rangers defeat the Armada once and for all, fighting in a huge battle against hundreds of X Borgs and dozens of Bruisers.

When Preston Tien read The Encyclopedia Of Magic & Spells is given to Preston Tien by Mick Kanic,The book contains a small bio on Chip Thorn amd the others Mystic Rangers ,Vida was mentions by book as one of the magicians who defeated Octomus the Master.

Vida was shown in archive footage along with the other Mystic Rangers in Scrozzle's database when the villains were looking for a past villain to revive with the Reanimizer and came across Koragg The Knight Wolf.

When events set into motion by Lord Drakkon caused the timeline to split into pocket universe, each anchored on a powerset, the Mystic Rangers were split off into their own pocket universe. Pink Mystic Ranger eventually received Zordon's call through the Morphin Grid and was among numerous Rangers who rallied to his pocket dimension led by the Quantum Ranger for the last stand against Lord Drakkon, reunited in the Command Center.

to teleported in the moon of world of coinless for the fight against Drakkon against his Ranger Sentries, led by Jason Lee Scott.

During the battle in the moon of the world of coinless, the Mystic Rangers driving the Titan Megazord is seen regrouping with Jack and Kira, however are attacked by evil Zord Serpentera, also is seen briefly in a Tommy Oliver's vision when an alternate Kimberly threw a green chaos crystal thrown at him.

Vida along with the other Mystic Rangers are among all the Ranger teams which appear in the Korean-developed mobile game Power Rangers Dash.

It is very ironic for Vida being the Pink Ranger as she hated the color pink at first (due to the fact her hair has white/silver bangs), but soon came to accept it near the end of the series. Vida loves to DJ at Rock Porium and is often filmed by her sister. Although she is more of a tomboy and usually means business, she is still kind and generous; She defended her sister when Madison was accused of being withdrawn and she protected Chip from being picked on when they were at school.

As the Pink Mystic Ranger, Vida wields the power of wind. She has shape-shifting powers which allow her to conjure giant, butterfly-shaped "Mystical Wings." She also can disguise herself as other people such as Clare. She usually rushes into battle, making her an effective fighter. She owns a Mystic Racer and can change into the Mystic Sprite which serves as the Mystic Dragon's head. In this form, she can use her shape-shifting magic to become a ball for the others to attack the enemy with. With her Legend powers, she can combine with Chip, Xander, and Madison to form the Mystic Lion.

The Mystic Sprite is the fairy-like Titan form of the Pink Ranger. Along with the Phoenix, it fills the chest cavity of the Titan Megazord. Forms the dragon's head. Can turn into a ball to be thrown at opponents. In this form, She is the smallest Mystic Titan. 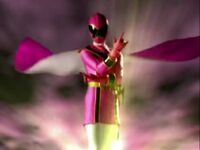 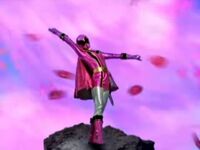 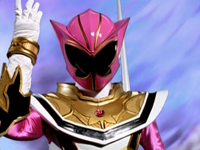