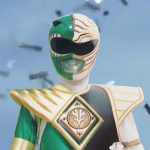 This zord configuration only appeared in the comic Power Rangers Turbo vs. Beetleborgs Metallix. When the two teams combined their Turbozords and Battle Vehicles, the two sets of colossal vehicles formed the Ultra Mega Turbo Beetle Battlezord. It was armed with the Turbo RAM Metallix Mode.

After a battle with the Changeling monster copies, Alpha 6 warned the Rangers that if they used too much of their energies, they would cause a permanent link between the two teams dimensions that would allow Nukus and Divatox to continue to join forces on a more regular basis. Before their connection cut out, Alpha informed them that the Beetleborgs' technology was compatible with their own. With this information, the five Rangers and three Beetleborgs decided to combine their zords and Battle Vehicles as well as the Rangers and Beetleborgs weapons. The resulting combination was the Ultra Mega Turbo Beetle Battlezord with Turbo R.A.M. Metallix Mode.

Using the Metallix weapons to boost the Turbo R.A.M., the Megazord was able to destroy the Changeling with a focused blast.

Retrieved from "https://powerrangers.fandom.com/wiki/User:Digi?oldid=182985"
Community content is available under CC-BY-SA unless otherwise noted.