Admin's note: Any assistance to the drafts of this potential future wiki page is permitted and greatly appreciated. The final draft will become an official page on this wiki which will list all the Sentai dances and try to help fans learn how to do each one with a step by step guide.

The development codename of this page is Project: Terpsichore, after the Greek muse and goddess of dance.

Building instructions for assisters
We need users good at describing dances (since I am a dork with two left feet) to observe these dances. More modern ones in recent seasons have special guest performers from other shows or Sentai shows, so listing those surprise guests is helpful. Also important is describing who dances to the songs and what theme was used to accompany the dance in question. Fine tuning the descriptions to make it more presentable is also welcome.

We also may need raw snapshots from episodes for galleries on dance steps, the Jetman Dance is presented as an example of this design choice. This won't be necessary for all of them, but it would compliment the pages in terms of aesthetic and instructional visual aid. Alternatives can also be discussed for use, such as user made dance diagrams.

Since Maskman, there have been moments in Super Sentai spread throughout its history where a dance accompanied the ending theme or some other song to entertain younger viewers and encourage them to join in. In later years, some of the dances became so popular that they were spread on social media and even got actors from other Toei superhero franchises or past Sentai seasons involved in performing them.

An early prototype of things to come, Sun Vulcan had an episode where the team danced with the children at a school to the song Kagayake! Sun Vulcan by Ichiro Mizuki and Koorogi '73. This would serve as a precursor to the ending theme dance tradition.

One of the first full examples of a Sentai dance was in Hikari Sentai Maskman: The Movie where the team danced to Shot Bomber Zenryoku Shuuchuu by Hironobu Kageyama. The dance also appeared in some of the TV episodes.

A dance that was featured in a special. Kaori Rokumeikan, untransformed, does an aerobics style dance with her teammates. After finishing, she guides the audience through each of the dance steps, doing them slowly so the viewer can learn each step.

The dance is performed to the opening theme of the series Choujin Sentai Jetman by Hironobu Kageyama.

1.Cross your arms and then crouch down, get up and then stretch your arms.

3. Crouch down upon the lyrics "Rettsu Gō!! Tobidase, ō!" and jump in the air with your arms stretched out, like a bird. Then put your hands on your hips and repeat step 2. 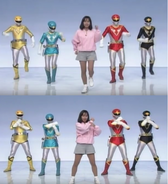 4. March backwards two steps, pose with your hands at your hips, then do the Cross Changer pose.

5. Top left: Spread and move your arms outward. Bottom Left: Then pose with your left arm against your chest with your left hand open. Top Right: Spread the left arm out, then your right in a "T" shape. Bottom Right: Then use your hands to touch the toes of your left foot, knee and then place it on your waist. Repeat on the right side.
Add a photo to this gallery

Performed by the Dorodoros during the ending credits to the ending theme Ninja! Matenrou Kids by Tu Chi Chen

1. Spread arms outward, do a wave motion up and down.

2. Do a ninpo gesture and move arms side to side

3. Stand on one leg and do a kicking dance step.

5.Stand up, with your hands splayed outward and do a two-step sideways to the right.

6. Turn sideways, swing your arms back and forth along with your right leg. Make "Scream" hand motions, moving them up and down near the sides of your face.

7. Do a Twist side to side, lowering yourself and then do a sideways downward dab to the left and right with your arms, then stand and face away from the crowd.

8. Top left: March in place. Top right: Pump your fists sideways, with your left above your head and your right fist near the waist. Bottom left: Prance to the right and tilt your head right then do the same to the left. Bottom right: Do a "spooky" pose as you turn around facing the crowd.
Add a photo to this gallery

During the summer months of Megaranger's original broadcast from episode 21 to episode 30, a second ending theme, Bomb Dancing Megaranger, was played that reflected the summer festival season in Japan. The Megarangers would perform a variation of a traditional Japanese bon dance to the music.

The Rangers would dance during the end credits to the ending theme Midnight Dekaranger, performed by Isao Sasaki.

Performed by the Go-Busters, Buddy Roids, and the staff of the Energy Management Center to the theme Kizuna ~ Go-Busters!. During the end credits of Kyoryuger vs. Go-Busters, the team dances were mixed together.

Performed to the song Minna Atsumare! Kyoryuger and its variants by the Kyoryugers. As part of a way of promoting Kyoryuger, Toei asked people online to perform the dance on camera and submit the videos to them, marking the first time that Toei would highlight fans of Super Sentai via a social media campaign. Some of them were chosen by the staff and then shown during the end credits of an episode.

In Episode 24, the Hurricangers made a dance cameo to promote their 10 Years After movie. To promote the debut of Kamen Rider Gaim

, Gaku Sano and the cast of the show performed the dance twice in the credits, once with Team Gaim

in Brave 31 and again with Kaito Kumon

The Kyoryuger dance is unique as it requires a different sequence of dance steps for each Zyudenryu and Guardians mentioned in the song, but with a repeating dance segment afterward. The dancers start by marching in place and then go through the list of 6 dinosaurs at a time. During the end credits of Kyoryuger vs. Go-Busters, the team dances were mixed together.

Once done with the six Zyudenryu or Guardians of a verse, shuffle to the left and then the right. Then do a waving point 4 times with the left arm and then four with the right, then steps forward twice and does a kick and walks back to the starting point. Do a short jump and then Daigo's hand pose before stretching the arms out to do a gliding airplane motion in a circle and then jumping in the air. Upon the lyrics "Whoa, oh oh, whoa oh oh!" jump up and down while arching one of your arms over your head and the other below your stomach and rotate to the opposite. Then step and step

Performed by the Ninningers, Yoshitaka Igasaki, Tsumuji Igasaki during the end credits and theme Nan ja Mon ja! Ninja Matsuri! by Daiki Ise[1]. This dance proved to be popular on social media, as many people performed it online around the world including Peter Sudarso[2].

To promote Tokusou Sentai Dekaranger: 10 YEARS AFTER, the cast of Dekaranger joined the cast of Ninninger to do the dance alongside them. Ryoma Takeuchi

performed it at one point.

Performed by the Kyurangers to the end credits theme Kyutama Dancing!.

The Kyutama Dance Note: A controversy arose during the early airings of episodes, as Japanese parental advocacy groups voiced their outrage of the pelvic thrust movements of the original Kyutama Dance. The dance steps underwent a minor change afterward and the original stopped being televised in May of 2017.

Ver 1. : Close both fists, knock them against each other, lean forward and then do a pelvic thrust twice and then turn counterclockwise while swaying back and forth.

Ver 2.: Instead of the pelvic thrust movements, after knocking both fists together in a downward position, lean back and stretch your right arm with your fist still closed upward while your left is at shoulder length. Like with Ver. 1, the dancing movements go faster as the song speeds up.

Performed by the Ryusoulgers, KishiRyuOh, Ui Tatsui and her father Naohisa, Drunn Soldiers and Kureon during the credits and the theme Que Boom! Ryusoulger.

Online at Toei and Nippon Columbia's Youtube channels, staff members of both companies performed the dance as well as singers and actors.

Retrieved from "https://powerrangers.fandom.com/wiki/User:Aldo_The_Fox/Sandbox/Super_Sentai_Dances?oldid=789676"
Community content is available under CC-BY-SA unless otherwise noted.