Urara is 20 years old at the beginning of Magiranger.[1]

A copy of MagiBlue was created by Hades God Toad as part of the Evil Magirangers.

Although she had initially shown a certain degree of animosity towards Hikaru due to his "cool" acting, she eventually fell for and married him in Stage 47, just before N Ma started his rampage.

By the end of the series, she had decided to go with Hikaru to Magitopia, with Magiel still adjusting to her living there.

Urara's sole appearance in the "Versus Series", Magiranger vs. Dekaranger, is featured in the Super Sentai Versus Series Theater, hosted by the heroes of Tensou Sentai Goseiger. Moune (Gosei Yellow) also dresses as Urara in the Dekaranger/Magiranger cosplay.

A few years later, Urara fought alongside not only her own team, but every single Sentai ranger in existance, against the Empire of Zangyack when it attacked the Earth in the Great Legend War. After fighting against hundreds of Gormin and their Zgormin commanders. AkaRenger noticed the fleet moving towards them, he gathered all the Rangers together and gave them the order to sacrifice their powers to wipe out the first invasion's armada.

After the defeat of Ackdos Gill, Captain Marvelous returned all the Ranger Keys to the former Sentai heroes. It is assumed Urara received her key alongside her elder sister Houka, allowing for them to utilize their abilities once again.

Kozukozu Mita cosplays as Urara in the seventh episode of the first season of Hikonin Sentai Akibaranger.

Urara, alongside her team (MagiShine, MagiMother, and Wolzard Fire were absent), among the majority of the Super Sentai heroes, was caught up in the "Super Hero Taisen" incident which eventually resulted in the Super Sentai teams and Kamen Riders joining forces to defeat both Dai-Zangyack and Dai-Shocker. During the final battle, she is seen in the background fighting Zangyack Commander Bowser and Cockroach Dopant. Later on, she and the other Magirangers were seen helping out Kamen Rider Hibiki to destroy each others' past enemies.

MagiBlue appeared with her team among the first 38 Super Sentai whom collectively empowered Wild Tousai Shuriken King in its fight against the titanic Gillmarda, granting the Ninningers and Zyuohgers the power to perform the Zyuoh Ninnin Super Sentai Burst which destroyed Gillmarda with the combined power of all 40 Super Sentai.

Urara joined the Super Sentai Strongest Battle as a member of Water Warrior Team. It’s unknown whether she participated in any of the matches, but her team lost the competition either in the first round against the Police Team offscreen or won against them and lost in the second round against Super Strong Team offscreen.

Urara has a gentle heart, often acting motherly, as shown in Stage 4 when she pushes Kai out of the way of a monster's attack and gets turned to stone herself. Smoky particularly considers her his mother figure. Especially after she cared to pay him to heed after he was unfairly blamed for various pranks pulled all over the city and ran away from home.

Urara is good at cooking, and cooks for her family multiple times during the series. This is also a part of her motherly side, and she also sometimes makes her mother's recipes.

Urara is also a passive sort of person, listening to the others and holding her tongue, hiding her own feelings of hurt and distress until they boil over and she explodes. Furthermore, a practical joke Kai played on her when they were children induced ranidaphobia (the fear of frogs). She had to overcome that fear to restore Hikaru to normalcy. She also freaked out when the Hades God Toad was chosen to carry out his Divine Punishment (she was both frightened and disgusted by him and his plan for his Divine Punishment for the surface world).

Her primary attack is "Magi Magika Blue Splash", which acts as either a high-powered stream of water or a barrage of exploding geysers. 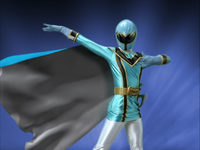 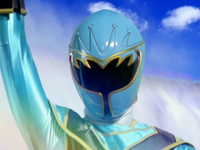 The MagiBlue Ranger Key (マジブルーレンジャーキー, Maji Burū Renjā Kī) is Urara Ozu's personal Ranger Key and what became of her powers after she along with the rest of the 34 Super Sentai sacrificed their powers to end the Great Legend War.

This key along with the majority of the Ranger Keys were collected by the Red Pirates and later used by the Gokaigers. The MagiBlue Ranger Key was mainly used by Joe Gibken (Gokai Blue), who used it to fight as MagiBlue. It was also used by Ahim de Famille (Gokai Pink) on one occasion.

The MagiBlue key is one of the five water-element Blue Ranger Keys that are used by Gokai Blue for his Five-Blade Style Blue Slash Final Wave attack, which was used once against Action Commander Zodomas. This attack involved summoning manifestations of the five Rangers to attack the target, with MagiBlue being the third to go.

The Magiranger keys, along with all the Ranger Keys of the first 33 Super Sentai, were briefly taken by the Black Cross King and turned into Ranger puppets that were fought by the Gokaigers and the Goseigers. Splitting up, the puppet MagiBlue was defeated as part of a group of surviving Blue warrior keys by Gokai Blue and Super Gosei Blue.

After Zangyack were finally defeated, the Gokaigers gave the Ranger Keys back to their rightful owners. Urara received her key and became MagiBlue once more.

A male version of the MagiBlue suit as seen in Kaizoku Sentai Gokaiger. 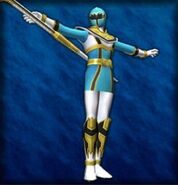 MagiBlue is among the vast pantheon of Rangers which are available in the mobile game Super Sentai Battle Base, with his Legend Magiranger form also being available.

MagiBlue appears with her team among all Sentai in the mobile game Super Sentai Legend Wars.