Believing her husband was killed during the Great Battle, she lived quietly in Root Core until an earthquake broke the seal that prevented the Morlocks from escaping and she was forced to recruit the Mystic Rangers after losing her ability to morph during a fight with Koragg.

Udonna was a powerful and talented sorceress whose people fought in the Great Battle against the Morlocks, which ended with the Morlocks being cast into the Underworld. Her older sister was a powerful sorceress called the Gatekeeper whose efforts to seal the gates to the Underworld ultimately ended her life. Udonna had a son called Bowen, by her husband, who was lost during the Great Battle.

One day Udonna has a nightmare about her husband Leanbow being tormented in a Hell-like dimension and bound in chains by the shadow of a sinister knight while she desperately tries to reach him before waking up crying. Udonna then consults with her magic teacher, the Mystic Mother, who reads her fortune through Tarot cards to determine the meaning of her apprentice’s dreams. Udonna beings reading a spellbook she stole to try and find a way to get to her husband. The Mystic Mother is hesitant about her ideas but decides to help Udonna cross the astral plane to where Leanbow could be.

Udonna finds herself in a dark cavern and sees her husband Leanbow in chains just like in her dreams and tries to comfort him, but he keeps screaming in agony and cannot hear her. The evil knight, Koragg, appears and tells Udonna to leave as the man she sees is nothing of her concern. Enraged, Udonna becomes the White Mystic Ranger and engages in battle with Koragg to try and free Leanbow. However, Koragg proves to be too strong for her as he effortlessly swats her away with his shield and sword. Despite thinking she's going to die Undonna refuses to give up, Koragg then gives Udonna a chance to walk away as he is intrigued by her warrior spirit and devotion to Leanbow.

He makes it clear that Leanbow is dead and cannot be freed from his chains, so either Udonna leaves and lives her life or she will destroy that life here and now. Udonna reluctantly accepts the offer and returns to Briarwood. As a side effect of returning to the waking world, Udonna lost her memories of the first encounter with Koragg. But she remembered her husband and realized that with time, patience and faith, she could banish the nightmares and create the “sweetest of dreams” as she continued to study the magic in the Xenotome. During one spell she sees a vision of a powerful Phoenix and the hope of the future... the Mystic Force Power Rangers.

When an earthquake broke the seal and freed the Morlocks in present day, she recruited the five Mystic Rangers and gave them their powers. As an accomplished sorceress, Udonna had the ability to become the White Mystic Ranger. However, she was defeated in battle by Koragg the Knight Wolf, who claimed her Snow Staff and her Ranger powers along with it. Without her Snow Staff as her Ranger weapon, Udonna was unable to morph.

She resides in Root Core, deep within the forest on the outskirts of Briarwood, and is teaching her niece and apprentice and the Rangers in the ways of magic.

Udonna was reunited with Daggeron and Jenji. Unfortunately, Leanbow and Bowen were nowhere to be found. She found out through Phineas that Bowen was somewhere in the human world where he took him to be safe during the war. When the Rangers were captured by Imperious, Udonna cast a dark spell in order to head down to rescue them, causing her to lose all her magic.

Udonna discovered that Nick was actually Bowen and Koragg was also Leanbow. She went on a journey, now as a mortal human, to find Leanbow, with Clare giving magical assistance.

When Udonna and Clare reached the Lake of Lament, they were confronted by Hekatoid, who knocked Clare unconscious and kidnapped Udonna, and put her under a spell to make her unconscious.

The other Rangers attempted to deal with Hekatoid, but proved useless when he stole their powers. During this time, Leelee, Clare, and Phineas sneaked into the Underworld to rescue Udonna. While they could do nothing to help her at first, Leelee produced the Snow Staff, stolen from her mother, and the trio used it to revive Udonna. Udonna, now morphed and with her magic restored, reappeared in Briarwood, and the six Rangers combined their powers to defeat Hekatoid once and for all.

Some time later, Udonna had astral projected to find Leanbow in the Underworld. There, she found him unconscious and used the power of her Snow Staff to revive him. In the finale, she fought Sculpin personally, although she tried to reason with him and both were sent to the Underworld, however Udonna was rescued by Necrolai and Itassis. She helped the other Rangers in destroying the Master. In the end, Udonna went with her husband and son on motorbikes to visit Nick's adoptive parents.

Udonna was not shown to have fought in the final battle between the Legendary Rangers and the Armada. Given her Sentai counterpart fought in the Legend War, it is entirely possible that she did indeed fight elsewhere.

When Preston Tien read The Encyclopedia Of Magic & Spells, given to him by Mick Kanic, it contains a small bio on Chip Thorn and the Mystic Force Rangers. Udonna was mentioned as one of the magicians who defeated Octomus the Master.

She was shown along with the other Mystic Rangers when the villains were looking for a past villain to revive with the Reanimizer, and came across Koragg The Knight Wolf.

When events set into motion by Lord Drakkon caused the timeline to split into pocket universe, each anchored on a powerset, the Mystic Rangers were split off into their own pocket universe, White Mystic Ranger eventually received Zordon's call through the Morphin Grid and was among numerous Rangers who rallied to his pocket dimension led by the Quantum Ranger for the last stand against Lord Drakkon, reunited in the Command Center.

Udonna along with the other Mystic Rangers are among all the Ranger teams which appear in the Korean-developed mobile game Power Rangers Dash.

The White Mystic Ranger is among the Rangers who are featured in Power Rangers Legacy Wars,she is a Epic (Leader), Epic (Assist) character ,represents Mystic Rangers alongside Daggeron and Leanbow.

Udonna as the White Mystic Ranger is a playable character in Power Rangers: Battle for the Grid,she use her Snow Staff primarily as her weapon.

As the White Mystic Ranger, Udonna commands the power of snow, which allows her to freeze evil in their tracks. 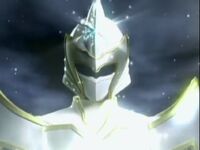 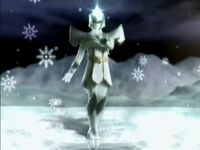 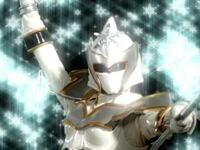 The White Mystic Ranger Key is Udonna's personal Ranger Key. This key has been used by the Mega Rangers in the Super Mega Cannon on one occasion so far.