Powers From the Past

A long time ago, Tyler lost his father in one expedition to a cave. What was left from his father was a notebook that his father used to write with a strange sketching of a warrior. A bracelet was also left too.

Tyler initially came to Amber Beach to investigate his father's disappearance ten years ago, first by gathering information at the Amber Beach Dinosaur Museum, then later by heading out to a cave similar to one his father investigated. Once there he found strange crystal among a T-Rex fossil. He was also chased after by a cloaked figure, whom he was able to evade.

Later, he saw the same cloaked figure attack a girl for a crate. The girl, Shelby, had no idea what was in the crate as well but both went to great lengths to make sure the cloaked figure couldn't take it. The figure reveals himself to be the monster Iceage and finally freezes both Shelby and Tyler in place. They are saved when they come into contact with crystals, revealed by Iceage to be Energems. The Energems free them of the frozen prisons, the surge of energy providing them with fossilized weapons. When Tyler figures out that the Energems go in the weapons, they fire and transform both Tyler and Shelby into Rangers.

TV STORY-Powers from the Past

While on their way back to the Museum, they found Riley Griffin, whose scooter broke in the middle of the journey and offered him a ride. They even save a man from his car via their Energems' powers followed by the discovery of an underground lab below the Amber Beach Dinosaur Museum which led them to become Power Rangers, as their Energems corresponded with their bravery.

Tyler and his friends soon become Power Rangers to stop Iceage and his Vivix while his T-Rex Zord eliminates two Vivizords. As the Red Ranger, Tyler and his T-Rex attacked in unison to eliminate Iceage.

After their confrontation with Iceage, Tyler works in the Museum, and as a cook in the Dino Bite Cafe, as a cover for his identity of the Red Ranger. At the same time, he was told that the mysterious warrior in his father's notebook is none other than Fury, thus trying to find out what relation he may had with his father.

Tyler receives a letter and met with Rusty, a man who knew and was on the same expedition as his father before his disappearance.

"I'd say this is cause for celebration, but... it might be too early."
―Tyler talking about their current situation[src]

Tyler, along with some other members of his team, traveled to the main dimension in order to find Keeper, there they fought some foot soldiers and met the Grid Battleforce Rangers. After Keeper got kidnaped by Evox's Army, the Dino Charge Rangers went to Grid Battleforce and explained the situation to the current team, both teams agreed to work together and rescue Keeper.

They soon accepted a bargain with Evox and went to an abandoned warehouse to trade Ryjack's collection for Keeper, but when Snide didn't follow up on the agreement both teams morphed and got ready to fight.

Tyler then called Shelby and Riley to fight Snide while the Beast Morphers Rangers took care of a Gigadrone attack. Tyler summoned his T-Rex Super Charge Mode, but just when the team defeated Snide, the newly revived Sledge and his crew appeared, fought and almost destroyed the Dino Charge Rangers if it weren't for the Beast Morphers Rangers appearing at the last second, blasting Sledge's crew and managing to get away after rescuing Keeper. After making sure Keeper was safe and thank the current team, the Dino Charge Rangers departed to their home universe until the next time they meet.

Days after their previous adventure, Tyler sent a message to Grid Battleforce saying that Goldar and Snide were attacking the Dino Charge Rangers and that they were after their Energems. Four of the Beast Morphers Rangers arrived but the villains still managed to steal four of the Energems and defeat both teams of Rangers, while Tyler and the others were hiding and discussing the villains' plans of making an evil Zord, Jason and Devon arrived and decided to split themselves into two teams.

Tyler followed Jason along with the rest of his team on a frontal assault while the Beast Morphers team attacked from behind. When Goldar Maximus and the rest of Evox's army arrived, Jason summoned his old Mighty Morphin' teammates and the Dino Rangers to defeat the army in a big fight.

When Evox summoned his massive Chimerazord, Tyler joined in summoning the Dino Charge Megazord and aiding in its defeat. With Evox on the run again, the teams departed and said goodbye to the Dino Charge Rangers.

When events set into motion by Lord Drakkon caused the timeline to split into pocket universe, each anchored on a powerset, the Dino Charge Rangers were further misaligned in the timeline. Lord Drakkon then attacked them. Tyler was initially captured by Lord Drakkon's army and held on the moon base. At the end of the Shattered Grid event, he was rescued from the base by a team of Rangers led by Grace Sterling.

He boarded Promethea with the other rescued Rangers and, when the universe was restructured at the end of the arc, he was left among those trapped in a different dimension.

When the timeline is restored, so is Tyler.

Tyler is curious, energetic, charming and gregarious; a free-spirit who fully embraces the idea that life is an adventure. While childlike at times, Tyler has the ability to switch on his serious side and his role as the leader is unquestionable. He is also very kind and friendly, always looking out for his friends. [1]He appears to have some sort of connection with Fury since he had something to do with his father's disappearance, in which Tyler recognized him from the book he held, showing an image drawing of the monster from his father before he disappeared, thus when he finds out that Fury was indeed responsible for his father's disappearance, Tyler shows a bit of negative side, such as obsessing over revenge against Fury for what he did to his father, until he witness that Fury has been controlling some unknown host he held, thus dropped his desire for vengeance towards him and instead saving the host who's been controlled by Fury, whom Tyler later was first thought and believe the host Fury held was his father. Tyler has a crush on Shelby and finally manages to tell her how he feels in the Power Rangers Dino Super Charge episode "Silver Secret".

Armor X was developed by Kendall as an enhancement to the Dino Charge Rangers' ranger forms to add weaponry and enhance movement. It originally only worked with the Black Energem as using it with any other charger or Energem would've caused an explosive blowback. It was later modified so that the Red Ranger could use Armor X.

After Heckyl plants a virus in Kendall’s computer, the T-Rex Super Charger malfunctions, causing Tyler to turn into a Tyranno Human; essentially a were-dinosaur, a human that thinks and behaves as a dinosaur. In this form he is constantly in a tyrannosaur-like stance and possesses heightened senses and reflexes. His helmet also functions as a dinosaur's head would, with the mouth design behaving like an actual mouth when roaring or biting in CGI appearance. This form is distinguishable from Tyler's normal form by his helmet's silver mouth plate becoming black.

TV STORY-Roar of the Red Ranger

This form is exclusive to DSC Episode 5.

The result of inserting the T-Rex Zord, Tricera Zord, and Stego Zord Chargers into the T-Rex Super Charge Morpher.

This form is exclusive to DSC Episode 6.

The result of inserting the T-Rex Zord, Tricera Zord and Ankylo Zord Chargers into the T-Rex Super Charge Morpher. This allowed Tyler access to the Tricera Drill and a massive blue hammer resembling the Ankylo Zord’s tail.

The result of inserting the T-Rex Zord, Pachy Zord and Ankylo Zord Chargers into the T-Rex Super Charge Morpher. It gave Tyler access to a massive wrecking ball on a chain and the Ankylo Hammer. Arsenal

The result of inserting the T-Rex Zord, Stego Zord and Spino Zord Chargers into the T-Rex Super Charge Morpher. Arsenal

This form is exclusive to DSC Episode 18.

Tyler assumes the role of the Pink Dino Charge Ranger after switching bodies with Shelby for a short time.

This form is exclusive only DSC Episodes 16

This form is exclusive only DSC Episodes 16 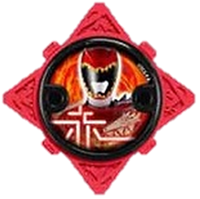 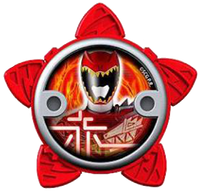