In the Driver's Seat

The Turbo Falcon Zord is a prototype Zord Attack Vehicle and a hybrid of a falcon and Formula 1 car that becomes an ally of the Super Mega Rangers.

It originally has the RPM logo on it and belongs to the Zords developed by Doctor K. When the Super Mega Rangers acquire it the Zord also bears the Super Megaforce logo. This Zord, unlike most Zords is self-aware with an A.I. system. While in development it is deemed wild and uncontrollable, being locked up and hidden away for the safety of others alongside the Paleozord. Its specs are part of the Legendary Ranger Database from the Morphin Grid allowing Noah Carver to understand its initial history.

To enter the Super Mega Rangers' dimension it must go through the Legendary Megazord's chestpiece opening straight from Corinth. However, it does seem to be able to return on its own.

Professor Cog unleashed it on Corinth and triggered an alert that prompted the Super Mega Rangers from another dimension to respond. The Rangers battled the Zord to tame it and it later became their ally.

The Turbo Falcon joins the last big Zord battle with the Super Mega Rangers and contributes to their winning streak until a larger wave of Armada forces arrive at Emperor Mavro's behest. While most of the Zords are badly damaged and/or destroyed the Turbo Falcon is forced back into Corinth's dimension. 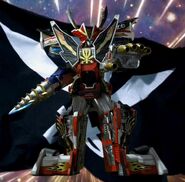