In early-November 2017, Watanabe was involved in an cycle accident at Nerima, Tokyo, where he was riding in his bicycle and crashed with another cycle which was operated by a mother who was also carrying her 2 daughters who were aged 4 and 6. Watanabe was not injured but the mother and her children suffered injuries. He later left the scene after the crash but immediately returned after 20 minutes to get help and told the police that he was involved in the accident and also apologized to the mother and children.[1] 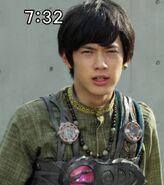 Fake Zyuoh Elephant (voice only)
Ep. 34: Megabeast Hunter Strikes Back
Add a photo to this gallery

Retrieved from "https://powerrangers.fandom.com/wiki/Tsurugi_Watanabe?oldid=970616"
Community content is available under CC-BY-SA unless otherwise noted.