Tsubasa Ozu (小津 翼, Ozu Tsubasa) is the Yellow Mage MagiYellow (黄の魔法使いマジイエロー, Kiiro no Mahōtsukai Maji Ierō) of the Magirangers. He is the 19 year old (20 in Boukenger vs. Super Sentai, 25 in Gokaiger, and 29 in Ninninger) second son of Miyuki and Isamu Ozu, the middle son and second youngest of the Ozu family. He is a wizard who wields the power over the Galloping Thunder Element (走る雷のエレメント, Hashiru Ikazuchi no Eremento).

He's intuitive, realistic and usually rational. He looks at life with a slightly skewed sense, is a bit closed in himself, cynical and sarcastic. Tsubasa also boxes and even coaches boxers when not fighting as a wizard. Tsubasa is generally the family’s rebel; he bickers a lot with his younger brother Kai and pays little heed to his older brother Makito’s bossiness.

Nevertheless, he is quite close to his older sister Houka despite their vastly different personalities. He fell in love with Rei in Stage 28 and refused to set her soul free because he did not want them to be separated. Tsubasa managed to save her when Neries used her soul to heal her throat, and even though Rei did love him back, they could not remain together because Rei was already dead.

By the end of the series he fulfilled his desire of being a boxer.

Along with his brother-in-law Hikaru, Tsubasa appeared in GoGo Sentai Boukenger vs. Super Sentai, when he was in a boxing match and Eiji Takaoka shows up. Later on he along with Eiji, Nanami Nono, Tetsu, and Asuka fight Chronos. He transferred his "Courage Spirit" power to AkaRed the Spirit of Red Rangers to power DaiVoyager.

A few years later, Tsubasa fought alongside not only his own team, but every single Sentai ranger in existence, against the Empire of Zangyack when it attacked the Earth in the Great Legend War. After fighting against hundreds of Gormin and their Zgormin commanders. AkaRenger noticed the fleet moving towards them, he gathered all the Rangers together and gave them the order to sacrifice their powers to wipe out the first invasion's armada. Ep. 1: The Space Pirates Appear Gokaiger Goseiger Super Sentai 199 Hero Great Battle

After the defeat of Ackdos Gill, Captain Marvelous returned all the Ranger Keys to the former Sentai heroes. It is assumed Tsubasa received his key alongside his elder sister Houka, allowing for them to get their powers back. Final Ep.: Farewell Space Pirates

Tsubasa makes a guest appearance in Ninninger, where it is revealed that he tutored Yakumo Katou/AoNinger in the art of magic. Sent to track down Elena who travelled to Japan to see Yakumo on her own, he encourages Yakumo to combine his magic and ninjutsu abilities to finish off Yokai Amikiri. After the yokai's defeat, Tsubasa repairs Takaharu's Ninja Ichibantou and Yakumo's magic wand and sends Elena off with his Sky Hoki. Shinobi 38: The Witch Girl Loves Yakumo?

MagiYellow appeared with his team among the first 38 Super Sentai whom collectively empowered Wild Tousai Shuriken King in its fight against the titanic Gillmarda, granting the Ninningers and Zyuohgers the power to perform the Zyuoh Ninnin Super Sentai Burst which destroyed Gillmarda with the combined power of all 40 Super Sentai. Doubutsu Sentai Zyuohger vs. Ninninger: Message from the Future from Super Sentai

An iteration of Tsubasa Ozu evidently existed in the Game World

. Yakumo Katou wished to fight alongside him as he entered the Chou Super Hero Taisen

tournament as part of Team Ex-Aid

. To his disappointment, however, he was not joined by his teacher but by a doppelganger, Masato Jin/Beet Buster. Kamen Rider × Super Sentai: Chou Super Hero Taisen

Despite Sphinx's efforts to reform the Empire, malicious "Infershia remnants" continued to threaten Earth as late as twelve years following the demise of N Ma, ever opposed by the Magirangers. By this time, Tsubasa was now an uncle to Houka's daughter, Fuuka, who had just entered school. On at least one occasion, Tsubasa had to summon his sister via phone call, who confided her struggle to continue the fight while raising her child to her fellow Hero Mamas. Strategy 1: Solved in no time! The Path to Glittering Hero Mama 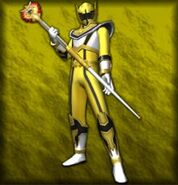 Legend MagiYellow as depicted in Super Sentai Battle: Dice-O
Add a photo to this gallery

MagiYellow is among the vast pantheon of Rangers which are available in the mobile game Super Sentai Battle Base, with his Legend Magiranger form also being available.

MagiYellow appears with his team among all Sentai in the mobile game Super Sentai Legend Wars.

MagiGaruda (マジガルーダ, MajiGarūda): MagiYellow's Majin Form. His arms, Garuda Wing (ガルーダウィング, Garūda Wingu), can be used as weapons in the "Garuda Attack". Forms MagiDragon's back, wings, and neck, and MagiKing's wings and back. He can shoot lightning bolts from his eyes.

The MagiYellow Ranger Key (マジイエローレンジャーキー, Maji Ierō Renjā Kī) is Tsubasa Ozu's personal Ranger Key and what became of his powers after he along with the rest of the 34 Super Sentai sacrificed their powers to end the Great Legend War.

This key along with the majority of the Ranger Keys were collected by the Red Pirates and later used by the Gokaigers. The MagiYellow Ranger Key was mainly used by Luka Millfy (Gokai Yellow), who used it to fight as MagiYellow.

The Magiranger keys, along with all the Ranger Keys of the first 33 Super Sentai, were briefly taken by the Black Cross King and turned into Ranger puppets that were fought by the Gokaigers and the Goseigers. Splitting up, the puppet MagiYellow was defeated as part of a group of surviving Yellow warrior keys by Gokai Yellow and Super Gosei Yellow. Gokaiger Goseiger Super Sentai 199 Hero Great Battle

After Zangyack were finally defeated, the Gokaigers gave the Ranger Keys back to their rightful owners. Tsubasa received his key and became MagiYellow once more. Final Ep.: Farewell Space Pirates

A female version of the Yellow Magiranger suit as seen in Gokaiger.
Add a photo to this gallery

A copy of MagiYellow was created by Hades God Toad as part of the Evil Magirangers.

In the Korean dub of Magiranger entitled Power Rangers Magic Force, which aired in South Korea, Tsubasa is renamed Yonah.

Retrieved from "https://powerrangers.fandom.com/wiki/Tsubasa_Ozu?oldid=752216"
Community content is available under CC-BY-SA unless otherwise noted.