Before becoming a Power Ranger, Troy was a martial artist (as of "The Human Condition", Troy holds the rank of black belt). During his teenage years, he receives visions about the Legend War - an armada of Power Rangers battling an unknown evil force, and among them, a mysterious new warrior. After one such dream, he woke up to discover that he was late for his first day of school. Later that day, Gosei summoned him and four others. He noted how the statues of other past Rangers lining the walls resembled those from his dreams. Gosei gave him the power of the Red Ranger, and soon he led the new Power Rangers into battle against the Warstar. The team won, and Troy rapidly adjusted to his new role as one of the defenders of Earth.

In the middle of the Mega Rangers' fight with Warstar scientist Yuffo, Troy was directly approached by Creepox in the forest, trying to goad him into a fight, but Troy refused.

During a prolonged battle with his team against Dragonflay, Creepox interfered to battle Troy. Though Creepox initially gained the upper hand at first, Troy finally managed to defeat him for the time being, forcing Creepox to retreat. As a result, Troy was too badly injured to fight when Dragonflay was enlarged, leaving it up to the Yellow and Black Rangers to defeat Dragonflay with the new powers of the Land Brothers Zords.

Troy and Emma later gained access to the Sky Brothers Zords and many other weapons.

Months later, Troy encountered two bullies in school. The bullies taunted him, asking if he was going to cry; his response was "Take a good look. You see any tears?" When he saw another kid getting bullied, he stood up for him.

After school, Troy fought Creepox for the third time. Though Creepox was once again still gaining the upper hand, Troy discovered that the monster was driven by rage, so he used his rage against him. Eventually Troy defeated Creepox with his Dragon Sword. When Creepox was revived by Vrak and his Zombats, Troy along with the other Rangers formed the Gosei Great Megazord. Seeing that wasn't enough, they formed the Ultra Gosei Great Megazord (formed with the zord he just earned from Gosei) to defeat Creepox once and for all.

After a heated battle against Vrak, Troy along with the other Rangers gained the power of Ultra Mode from the ancient Wild Sword.

It was Christmas. Gia and Emma had finished shopping given the presents to the guys, but the guys had forgotten. Noah calls them to see Robo Knight, who agreed to pose as a holiday toy.

Returning to the Command Center after battling the invading army of XBorgs, he and the rangers receive their new Super Megaforce powers to fight the newly arrived Armada with. After their first battle, Troy goes to the beach and asks "Where are you, Robo Knight?"

With Harwood City being rebuilt, Troy stumbles upon a plot by the Armada to launch missiles at major cities throughout the world.

Troy and his friends battle against the royal alien family member Prince Vekar and the Armada branch under his command. Troy and his friends later meet Orion, the Super Megaforce Silver Ranger and replacement to Robo Knight, who told them about his backstory of how his native planet Andresia was destroyed by the very enemies the Megaforce were fighting now. Troy and the rest of the Rangers formed a friendship with Orion. After defeating Prince Vekar for good and destroying him along with the Armada Megazord, Troy and the Rangers later fought against Vrak and Robo Knight, the latter of whom was turned evil as Orion was kidnapped by Vrak to absorb his life energy into special sources, canceling the Rangers' Legendary Modes and powering up his key-shaped drills to destroy the Earth.

The Hyperdorce Rangers time travel to year 2014 the year that star the Legendary Battle, Chloe Ashford activates her Pink Battle Warrior form and enters Emperor Mavro's lead armored ship when Troy and Orion crash Orion's armored ship into the side of the lead ship. . Later, he and Orion are saved by Chloe.

Troy's Megaforce Red helmet and the other several Rangers helmet are seen in a Jason Lee Scott's flashback and vision to the battle on the Moon of Shattered Grid.

Troy along with the other Megaforce Rangers as well as their Super Mega Mode are among all the Ranger teams which appear in the Korean-developed mobile game Power Rangers Dash. 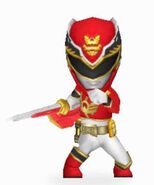 The Megaforce Rangers as seen in Power Rangers Dash.

Troy is a born leader, though he may not know it yet. His tough upbringing made him responsible and focused, and it shows in his incredible martial arts skills. As the new kid in town, he's kind of a loner at the start, but makes fast friends when he joins up with the Megaforce Rangers. Troy is compassionate and loyal, and a true champion of the underdog. But mess with the Red Ranger's friends, and they are in for a fierce fight with him and his Dragon Zord. Additionally, Troy has a strong faith in humanity and believes that if they work together, they can do anything. He also will not initiate a fight unless it's absolutely necessary, shown in his first encounter with Creepox, a general of the Warstar Insectoid aliens.

Troy is also known for being one of the more serious Rangers to appear in the series, while having a sense of humor occasionally, he (much like the Wolf Ranger from Power Rangers Wild Force previously) is always sharp in battle and will stop at nothing to destroy the Armada and save the world.

He became close to Robo Knight, spending all his free time looking for him shortly after the Armada arrived. During the final battle with Vrak, who had corrupted Robo Knight, Troy let out a rage-filled battle cry in his friend's honor, slaying Vrak for good.

While still unmorphed and living a normal life, Troy is usually very quiet, far more than his friends who talk often. He'll say things here and there, but only when they are necessary. He tends to talk the most when a threat is looming, and while he's leading. Troy also speaks in a calm and collective manner, and doesn't display a lot of emotion. He also seems to enjoy practicing martial arts, as seen when he trains with his friends, and in the first episode when he tries to kick a drink bottle before being teleported to the command center.

As Megaforce Red, he has a Dragon motif. He pilots the Gosei Dragon Mechazord. Red Ranger's main weapon is a sword called the Dragon Sword that resembles Dragon Mechazord's tail. He uses Power Cards with his Gosei Morpher.

Ultra Mode is the Mega Rangers' power up.

In Super Megaforce, Troy and the other Mega Rangers will gain the Super Mega Mode which allows them to morph into the past Rangers that have preceded them.

This form is exclusive to SM Episode 11.

This form is exclusive to SM Episode 12.

This form is exclusive to SM Episode 12.

The Megaforce Red Ranger Key is one of Troy's personal Ranger Keys. This key along with the majority of the Core Ranger Keys are seen lining the Command Center's interior walls. This key is mainly used by Troy Burrows (Super Megaforce Red). Although it hasn’t been seen being used, it has been seen in the toyline. 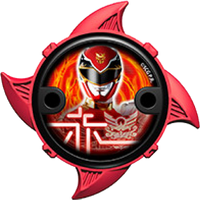 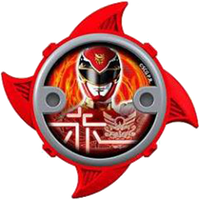 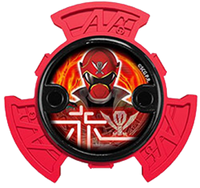 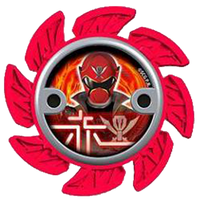