Force From The Future (1)

Trip is Time Force Green of the Time Force Rangers and a native of the planet Xybria, thus making him the first non-Earth native Green Ranger.

Trip is the naive member of the team, since his society is one without secrets. As such, he is sometimes gullible, leading to negative consequences.

Trip looks up to the other Rangers, but is a good Ranger in his own right. He is extremely skilled with technology, having created the Electro Booster weapon as well as their robotic owl, Circuit, whom he is very close to. Trip is also willing to stand up for what he believes is right, such as when he tried to protect a mutant named Notacon (who did not want to be evil) from being destroyed by Eric Myers just because Notacon was a mutant; Trip even put himself on the line to protect the poor mutant, and Eric deliberately missed the pair, sparing them. Trip is really trustworthy and friendly mainly to Katie (Yellow Power Ranger) who is closest to him.

Trip was partly responsible for the reform of Nadira. He forced her to help a woman in labor, and the vision of the newborn made Nadira reconsider her customs. Then Trip was sent back to the future by Wes, but he accompanied the others to the present to help him fight. They successfully captured Ransik and Trip has to return home.

A year later, Trip returned with the other Time Force Rangers to fight against the Mut-Orgs along with the Wild Force Power Rangers both teams located the Mut-Orgs that were in a power plant, then they went to a place where they were to avoid rewriting the timeline, Trip along with Danny, Max, and Lucas went to the control room of the plant thus preventing the reactor from then proposing Putrid intervened but Lucas, Danny and Max covered him until he tripped it, then both teams of Rangers faced the already weakened Mut-Orgs finally destroying them with their Chrono Blasters, Crystal Sabers and accompanied by the Battlizers of Wes, Cole and Eric, then surprised at the miraculous recovery of Ransik, all headed for a field day organized by Princess Shayla on the Animarium.

The Time Force Rangers were featured in a chronicle of Power Ranger history compiled by Tommy Oliver shortly after he formed the Dino Rangers, which was found by the nascent Ranger team in the Dino Lab.

Trip and the other Time Force Rangers returned as part of the army of that helped the Mega Rangers defeat the Armada once and for all, fighting in a huge battle against hundreds of X Borgs and dozens of Bruisers.

When events set into motion by Lord Drakkon caused the timeline to split into pocket universe, each anchored on a powerset, the Time Force Rangers were split off into their own pocket universe.

Based from Outpost One, the Time Force Rangers investigated a fracture in space time, caused by interference in the past, which endangered the entire multiverse. In an attempt to repair it, an explosion pierced the Megazord, resulting in the Green, Yellow and Blue Rangers being sucked into the fracture.

With the timeline later restored, so is Trip. 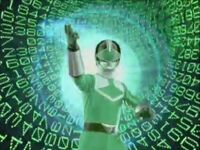 The Time Force Green Ranger Key is Trip’s personal Ranger Key. This key along with the majority of the Core Ranger Keys are seen lining the Command Center's interior walls. This key is mainly used by Jake Holling (Super Megaforce Green) who uses it to fight as the Green Time Force Ranger. Although it has not been used , it has been seen in the toyline.