"Things are about to get mighty hot around here."
―Trifire's first lines after being created by Jinxer.[src]

"I’m getting bored, LETS GET THIS OVER WITH!!"
―Final words before permanent death[src]

Trifire was resurrected and powered up by Queen Bansheera as well and helped Magmavore to beat the Lightspeed Megazord. He was destroyed by the Supertrain Megazord. Rising From Ashes

Trifire is a ruthless monster that loves to burn down everything with his fire breath. 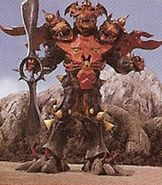 Retrieved from "https://powerrangers.fandom.com/wiki/Trifire?oldid=935648"
Community content is available under CC-BY-SA unless otherwise noted.