Psycho Green (formerly named Trek) is a Psycho Ranger. He was also originally Supersonic Green, the Green Ranger of the Supersonic Rangers.[1]

Despite being a native of the planet Xybria, details concerning Trek, such as origins and point of recruitment into the Supersonic Rangers as their Green Ranger have not been explored. However, events from the team's final mission revealed that Trek and the team's Red Ranger, Ace, had frequent arguments concerning Ace's frequent decision to exclude him from field missions.

At an unknown point, the entity known as Dark Specter made contact with Trek and started to fill his head with the idea that in the eyes of his team, he was worthless and they never considered him one of them, this idea eventually drew Trek to follow Dark Specter's commands.

On one such occasion, the core team were preparing to mobilize when Star, the team's Pink Ranger, grew concerned over her inability to read Trek's thoughts; as she had normally been able to. However, upon arriving at the mission site, Trek tried to warn Star against continuing with the mission but fails. As the team proceeded into the building, an explosion ripples throughout the building. Among the rumble of the demolished building, Trek finds an wounded Ace and confesses to orchestrating the entire attack, before shooting him dead.

Following the demise of his teammates, Trek departed for Planet Infernus to report his mission results to Dark Specter's avatar. Dark Specter then uses his dark power on Trek's morpher to change him into the very first Psycho Ranger - Psycho Green. He then served as Dark Specter's right hand.

Around 1869, he was sent to the Moon in order to release Rita Repulsa from her prison. However, defense cannons placed by Zordon and Alpha 5 shot down his spaceship. Unbeknown to the two, Psycho Green survived and his ship placed him within hibernation until it could detect lifeforms for a possible rescue attempt. In 1969, the events of the Moon Landing inadvertently reactivated the ship and awakened Psycho Green.

However, the attack didn't kill him and he returned in a second form, a giant, flaming, green monster. After chasing the Ranger trio to Rita's palace, he was finally incapacitated by Nikolai, who sacrificed himself to cause an explosion inside of Psycho Green. The only thing that remained of Psycho Green on the surface was his dagger/knife which was secretly taken by Grace.

In reality, Psycho Green was merely buried under the surface of the moon for decades, his armor battered, but his powers preserving him in the prime of his youth and sustaining him purely through the combination of Dark Specter's dark energy and Trek's own corrupted connection to the Morphin Grid. For years, Trek remained in the shadows and managed to escape the Z-Wave through unknown means.

Trek is playable as Psycho Green and his Monster Form Attire in Power Rangers: Legacy Wars.

Trek was known even in his ranger days to be jealous, boastful, confrontational, and highly aggressive with his team as well as his enemies. His ire with the perceived mistreatment by the seer, Ace, proved homicidal, as he killed his entire team by way of morph bomb, which indicated that Trek was intelligent, strategic, and had a calculated understanding of the weaknesses and mindsets of those around him, which is consistent with his powers as an empath. Despite his currently psychopathic mindset since his empowerment by Dark Specter, Trek merely seemed to have a vain, bitter, and resentful mindset towards his former comrades. However, after being endowed with great power by Dark Specter, he has become far more sadistic, his vanity and arrogance giving way to sheer sadism and moral nihilism.

Thanks to a gem embedded in his forehead, he is an empath. His connection to the grid allowed him to channel green energy blasts regardless of whether or not he is morphed. The gem in his forehead grants him empathic abilities, allowing him to feel the emotions of others and act on them to his advantage. This made him extremely perceptive when dealing with the leader of the Supersonic Rangers, as Trek was able to take advantage of Ace's near-blind faith and boundless confidence in his clairvoyant powers. 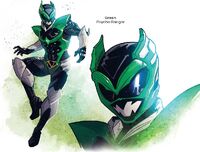 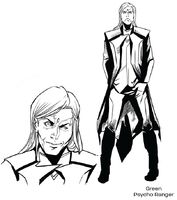