A Monster of Global Proportions

"I call on the power of Tor!"
―Summoning command.[src]

Tor the Shuttlezord was the turtle based Carrierzord of the Thunderzords and belonged to the Mighty Morphin Power Rangers.

Due to Titanus being only compatible with the Dinozords, Zordon has to create a new Carrierzord to give the Power Rangers an edge. As such, Tor is created when Zordon fuses a green crystal with a turtle sometime after Tommy Oliver becomes the Mighty Morphin White Ranger.

As the Power Rangers struggle against Lord Zedd's monster Four Head, who even manages to defeat the Mega Tigerzord with its own attack, Zordon then sends forth Tor to aid the Power Rangers much to Four Head's shock. However, the monster manage to topple Tor and the Red Dragon Thunderzord is forced to salvage the situation and flip Four Head away before flipping Tor back upright. Tor then transforms into Warrior Mode and sends numerous rockets and missiles right at Four Head who is unfazed. The Red Dragon Thunderzord then enters Tor's shell and Four Head fires at it but its thick armor means that neither Zord is fazed which allows Tor to re-energize the Zord. The Rangers then form the Thunder Ultrazord which finishes Four Head off.

With Jason, Zack and Trini going to a Peace Conference and thus the Power Rangers being at half power, Lord Zedd unleashes his gigantic Zord Serpentera to annihilate the Earth. As such, Zordon introduces Tor to the Power Rangers (despite them already having met it) and reveals its incredible ability to shield them from Serpentera's lightning and incredible weight. Later, when the Red Dragon Thunderzord tries to confront the enormous Zord, Jason realizes that his Zord is barely bigger than the Evil Zord's ankle and Serpentera starts advancing on it, he summons Tor the Shuttlezord to counteract it. Barely dodging the Zord's foot, it rolls and enters Tor in Warrior Mode's armor but Serpentera kicks it over and back into Shuttle Mode. Although it spends about half a minute grinding Tor into the ground, they have to release it to conserve power to fulfill their plan which allows the Zords to escape.

After the Red Dragon Thunderzord and White Tigerzord are blasted by Silver Horns' horn fire, Tommy summons Tor as the remaining four Power Rangers summon their Thunderzords. Together, they form the Thunder Ultrazord which crushes the monster to death.

With Goldar and Scorpina having returned and been enlarged, Zordon tells the Power Rangers to summon Tor to form the Thunder Ultrazord should they need it. Sure enough, once the two giant super-villains defeat the Thunder Megazord and White Tigerzord, Tommy summons Tor and they combine into the Thunder Ultrazord which blows away the two villains and forces them to flee.

When Rocky enjoys playing Ernie's new pachinko game, Zedd casts a spell on it which causes Rocky to have an unhealthy addiction to having fun. Rocky thinks only about games which Zedd hopes will distract the other Rangers long enough for him to attack Earth with Serpentera. Serpentera arrives immediately after the Thunder Megazord slays Pachinko Head and rips apart the formation with its lightning. With the Red Dragon Thunderzord completely down and exposed, Rocky summons Tor to counteract it. Barely dodging the Zord's foot, it rolls and enters Tor in Warrior Mode's armor but Serpentera kicks it over and back into Shuttle Mode. Although it spends about half a minute grinding Tor into the ground, the attempt somehow drains over half of Serpentera's power and Zedd and Goldar are forced to retreat back to the Moon once again.

After the Red Dragon Thunderzord slashes Cannontop whilst riding the White Tigerzord, Tommy summons Tor via Saba. As Cannontop gawks at it, Tor transforms into Warrior Mode and bombards the monster with its lasers. It sits out the remainder of the fight as the Mega Tigerzord destroys Cannontop.

After the battle with Cannontop, Tor is never seen or mentioned again so likely went into storage in the Command Center. Considering the fact that the Thunderzords were later destroyed by Rito Revolto, Tor is presumably melted down to be used for future projects.

When the Rangers obtain their Ninjazords and are in need of a compatible Carrierzord, Tor is officially retired in favor of a modified Titanus.

It's unclear what became of it after this, as it may still be dormant on Earth. During Zeo, Billy mentions that he makes the Zeozords out of recycled Zords, making it possible Tor was among the Zords dismantled. However, this is never confirmed.

Tor could transform into a Warrior Mode by "standing up" and retracting its head and neck and Tor's back would become the front of the Zord. In this mode, it could shoot rocket like energy lasers out of its fingertips and open up its chest for the Red Dragon Thunderzord to enter it and re-energize. Presumably, it could do the same with any of the Rangers' Thunderzords but this was never shown onscreen. 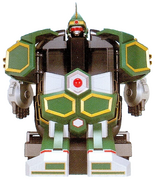 Unlike the Dino Ultrazord before it, the Thunder Ultrazord didn't mow down its enemies with a massive barrage of lasers. Instead, the Red Dragon Thunderzord would twirl its staff like a helicopter rotor to lift the Zord and drop it on top of an opponent, crushing and destroying the monster.

The Thunder Ultrazord was rarely called upon, only being used a total of three times before Tor was discontinued.