Tomarezu is the first Yuumajuu released by Makuin and Kinggon in a plot to kill prominent figures in the society, in hopes that their loss will cause the loss of role models and thus cause humanity to lose all hope and fall apart without people to support. After killing everyone from the prime minister of Japan to a boy band with his Poison Blast, Tomarezu is confronted by the Goseigers by tricking him into trying to attack an ice skater using Camomirage to hide their true appearances. The Gosei Angels have a hard time with him due to his increased power associated with the high volume of pollution empowering him and his masters, Makuin and Kinggon who support the work of the Yuumajuu. However, as the Goseigers become weakened by the polluted goo from Makuin, a mysterious warrior calling itself Gosei Knight appears who has an easy time facing the creature and ultimately destroys the Yuumajuu with his Knightick Dynamic with his victims reverting to normal. When Tomarezu appears to be defeated, he mysteriously grows giant (due to the Bibi Bugs of the hidden Buredoran of the Chupacabra) as he transforms into vehicle mode. Gosei Knight takes on Tomarezu alone, transforming into the Groundion Headder and knocking around his vehicle form before destroying the Yuumajuu with the Groundion Eraser.

Tomarezu of the Tsuchinoko is later summoned as a phantom illusion by Semattarei of the Brocken Spectre, initially fighting Gosei Great as an illusion but then being given physical form after Buredoran powers him up with the Abare Headder. Unlike his original form, where he was unnarmed, Waraikozou now wields a sword in combat. They thrash the Goseigers and are ready to kill them. However, it eventually turns to thier side and gives them the Miracle Headders which allows them to access thier Super Goseiger mode which esily take down the monsters and finish off Semattarei and his illusions with the Super Sky-Land-Sea Dynamic. 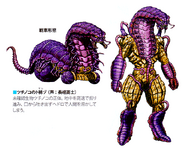 Tomarezu of the Tsuchinoko Concept Art