The Tokei System (トケイ座系, Tokei-za-kei, Horologium System) is a star system whose Kyutama was housed on its planet, Toki. As one of the 88 Constellations, it is part of the space dominated by the Space Shogunate Jark Matter, with its power embodied by its very own legendary Kyutama.

Intending to travel back 300 years to witness the supposed demise of Don Armage, the Kyurangers came to Toki and recovered the Kyutama after twisting all twelve keys within 30 minutes. Space.25: Planet Toki, the Boy's Determination! 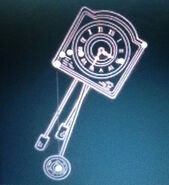 The Tokei / Horologium Constellation
Add a photo to this gallery

The Tokei Kyutama (トケイキュータマ, Tokei Kyūtama, lit. Clock Nine Ball) is the auxiliary Kyutama which embodies the constellation Horologium. It allows its user to travel through time. Because of energy consumption, it can only be used twice before disappearing.

Retrieved from "https://powerrangers.fandom.com/wiki/Tokei_System?oldid=865287"
Community content is available under CC-BY-SA unless otherwise noted.