Number 43: The Man Who Returned

"I want to be reincarnated as a frilled lizard!"
―Final words before Death[src]

Tokagale Nakushaku was battling the Lupinrangers and they managed to tie him up to pole where Lupin Yellow gained access to his safe, only to find that it was empty due to Narizma Shibonz took his treasure for his scheme. When the Patrangers showed up to battle the Lupinrangers, Tokagale broke free from his restraints and escaped by running across the water.

That night, he appeared at an alley walking in disappointment until he comes across the Elastic Heart / La Coeur Elastique Lupin Collection and it was for him to keep which made him so excited that he'll cause more chaos the next day.

He later appeared at the warehouse and thought it was Noel that gave him the treasure, but it turns out to be "Satoru Shinonome" where he escaped the onslaught from the Patranger, but now he has to battle Lupinranger once again. He used the treasure's ability again to dodge the energy blast, but this time with the equipped VictoryStriker, Super Lupin Red was able to predict where Tokagale is about to land and he easily shot Tokagale at the exact spot. After that, Lupin Blue holds Tokagale in place as Lupin Yellow gained access to Tokagale's safe and got the Resilient Bomb. After that he was then taken out by Patren2gou and Patren3gou.

However, he was enlarged by Goche Ru Medou only for him to be taken out by Victory Lupin Kaiser's GoodStriker: Blow 'Em Away Magnum. 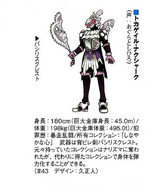