Chronos allied with Gajah, who supplied Chronos with three Gordom Engines, which he used to revive Sorcery Priest Meemy, Duchess Org Tsuetsue, and Spear One, Furabiijo to assist in his plan. In the end, he used the three sorcerers to create a new Precious, the Staff of the Three Philosophers, to make himself stronger and grow giant. He could execute stronger versions of the attacks of the Boukengers' mecha, including a technique called the Triple Screw which was a varient of DaiVoyager's Double Screw.

He had the upper hand until AkaRed harnessed the power of Sentai teams of the past and gave it to DaiVoyager to turn it into Burning Legend DaiVoyager. He was completely helpless against it and they destroyed Chronos and the Precious he wielded with the 30 Super Sentai Attack. 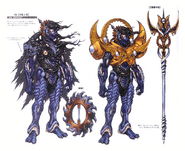