The Crimson and Navy Thunder Morphers were modeled after a Hercules Beetle and a Stag Beetle respectively.

The Thunder Rangers were robbed of their powers by Lothor, with their morphers being cast into the Abyss of Evil.

TV STORY-Storm Before the Calm Nearly a year later, the Ninja Rangers reclaimed, and shortly after, permanently lost their morphing powers in a final battle against him (alongside the Dino Thunder Rangers).

Years later, however, Hunter and Blake were able to morph again and joined their fellow Ninja Rangers with the other Legendary Rangers to help the Mega Rangers to defeat the Armada.

Blake and Hunter would cry out "Thunder Storm, Ranger Form!", and push a button on the underside of their morphers, opening the 'wings' to reveal their Power Discs, to transform. 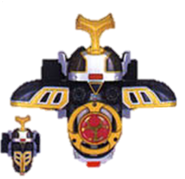