"I’m afraid nothing we could do would ever give {the Dinozords} enough power. You now need stronger, new Zords equipped with the power of thunder to defeat Lord Zedd. (...) Jason, you will control the Red Dragon Thunderzord. His power is fierce and true. Trini, yours shall be the Griffin Thunderzord. Swift and accurate. Zack, the Lion Thunderzord will have courage and strength. Billy, your Unicorn Thunderzord has mythological powers and wisdom. Kimberly, the Firebird Thunderzord shall be yours. Powerful and agile. When joined together, also form the Thunder Megazord!"
―Zordon introducing the Thunderzords to the Power Rangers.[src]

After Nimrod is enlarged and blasts all five Rangers down, they summon the Thunder Megazord to destroy her but it is low on power due to the Command Center having its power rerouted for the creation of the new White Ranger. Nimrod summons her henchwomen named AC and DC and their combined attack causedsmassive damage and taking it out of action, forcing the Rangers to retreat.

After Tommy is granted the powers of the White Ranger, the White Tigerzord is created and fights the trio only to be defeated by their teamwork. As the Scarlet Sentinels advance on his Zord to destroy it, Tommy calls for help from Jason and manages to get the White Tigerzord back on its feet just as the Red Dragon Thunderzord arrives and it rides the Tigerzord into battle, turning the tide by jabbing AC and DC aside with its staff and slashing Nimrod across her waist. AC and DC charge and Nimrod barrages the two with her energy balls but they are unfazed and Tommy has the Red Dragon Thunderzord eject from the White Tigerzord. Tommy then re-enters his Zord and turn it back into Warrior Mode immediately before the Unicorn, Griffin, Lion and Firebird Thunderzords arrive with Zordon having apparently sent them through remote control. Tommy has the Zords combine which forms the new Mega Tigerzord and the new formation finishes off the Sentinels.

Although the Power Rangers defeats Four Head with the Power Blaster, Zedd makes her grow before she hits the ground. The Rangers summon the Thunderzords and form the Red Dragon Thunderzord Warrior Mode and White Tigerzord Warrior Mode but she immediately blasts them and they form the Mega Tigerzord] Four Head is not intimidated so it tries to destroy the monster but Four Head manages to reflect the Firebird blast back at the Mega Tigerzord, Fortunately, Zordon sends the new Carrierzord Tor the Shuttlezord to aid the Power Rangers to Four Head's shock. However, the monster manages to topple Tor so the Red Dragon Thunderzord is forced to salvage the situation by flipping Tor back upright. Unfortunately, Four Head charges and delivers a beat-down to the Red Dragon who then grabs and throws her but Four Head lands on her feet and blasts down the Zord. Tor transforms into Warrior Mode and sends blasts right at Four Head who is unfazed. The Red Dragon Thunderzord then enters Tor's shell and Four Head fires at it but its thick armor means that neither Zord is fazed which allows it to re-energize the Zord. The Rangers then form the new Thunder Ultrazord which finally finishes her off.

When Goldar steals Saba from Tommy due to a spell placed on him that makes him argue with Kimberly a lot, Rita Repulsa temporarily controls the White Tigerzord and turns it into Warrior Mode to fight the Thunder Megazord. Immediately, the Tigerzord does very heavy damage with a single punch and knocks it back with a wind-up punch and then beats on it more. As Rita and her minions cheer on, the Tigerzord topples the Thunder Megazord with a single punch that makes it crush a building but it recovers quickly and they exchange upper body blows as the villains cackle below. The Megazord blocks a powerful swing but the Tigerzord closes in for a very powerful punch so they switch to their swords. Even now, the White Tigerzord is too much and delivers a devastating double slash strong enough that another hit similar to that will destroy the formation. However, before Rita can finish off the Rangers, Alpha 5 builds an Electro Magnet which allows Tommy to recover Saba and retake control of the Tigerzord. Disgraced, Rita and her minions are forced to flee or risk being crushed underfoot by the Tigerzord. 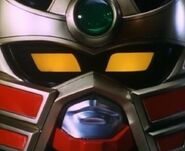 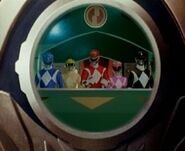 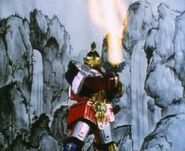