He is retroactively referred to as Blue Jungle Fury Ranger - a variation of his in-show label. He is one of the guardians.

Theo was born along with his twin brother Luen Martin.

TV STORY-Blue Ranger, Twin Danger Theo eventually joined the Pai Zhuq academy along with his friend Lily Chilman, during his second year he learned to use the Tonfas, despite lacking the ability to use it at first, Theo eventually learned thanks to Master Mao's teachings.

After a few years, he along with Lily and Jarrod were chosen to be the guardians for the box that contained Dai Shi. He was present when Dai Shi was accidentally released by Jarrod. Travelling with Lily and the new Pai Zhuq student Casey Rhodes, he became the Jungle Fury Blue Ranger, under the mentorship of RJ. He also started working at RJ's pizza parlor with his fellow Rangers.

After their first battle as Rangers, RJ trains the teens with their new weapons, with a pair of tonfa for Theo, but Casey struggles with the nunchuck due to still being a novice. Theo says that is not fair for them be held back just because Casey is not ready yet, but RJ says that a team can't work until all parts are equal. Theo eventually decides to train Casey after Lily reminds him of his own training. Thanks to their training in the forest, Casey quickly improves on his technique with the nunchuck. Casey later give Theo a lesson in pizza making.

Despite being the best and fastest learner at everything, as well as the best worker at Jungle Karma Pizza, Theo's confidence was diminished after being humiliated in a fight against Gakko. Due to him not being defeated in a long time, Theo became upset over what happened, not wanting to talk to neither Lily nor Casey, this catched RJ's attention. RJ took Theo on a roadtrip to train while Casey and Lily dealt with Gakko, during the training Theo gets more annoyed as he says that he can't complete the training, RJ tells him that everybody loses and what's truly important is what we do when we lose a fight. After this Theo successfully completes his training and arrives to help his fellow Rangers against Gakko, defeating the Rinshi in a fight on the side of a building.

TV STORY-Can't Win Them All

In the final episode, he and Lily finally go out together. Like his fellow Rangers, Theo also passes his master test and gets a Pai Zhuq Master Tattoo.

Theo and the other Jungle Fury Rangers returned as part of the army of Legendary Rangers that helped the Mega Rangers defeat the Armada once and for all, fighting in a huge battle against hundreds of X Borgs and dozens of Bruisers.

COMIC STORY- Mighty Morphin Power Rangers 2018 Annual His Morpher was present at Drakkon's lair, concluding that he may been captured by Lord Drakkon.

When the timeline was restored, so was Theo.

A straight-laced, private school conformist who never wants to get into trouble or break the rules, he is not necessarily a nerd, but he is smart, strong, and a good fighter, and he sometimes gets frustrated by Lily's free spirit.

Despite his intelligence, Theo is slightly selfish and needs to learn teamwork. It is revealed that he has secret feelings for Lily as he tries confessing them to her on a few occasions. It was also hinted that Lily might have been waiting for him to ask her out for a while.

Achieved after he faced his fear and passed his test given to him by Master Lope in Ghost of a Chance. 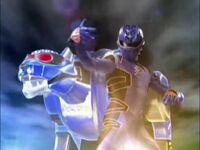 With the stealth of a Jaguar
Jungle Fury Blue Ranger