The Power Transfer is a two-part episode and the twenty-seventh and twenty-eighth episodes of the second season of Mighty Morphin Power Rangers.

It is the conclusion of the Peace Conference arc that began with "A Monster of Global Proportions", featuring the departure of Jason, Zack, and Trini who left for a peace conference in Switzerland and transfer their powers to Rocky, Adam, and Aisha. It also featured the first appearance of Lord Zedd's personal Zord, Serpentera.

With three of their own preparing to move on with their lives, the Power Rangers must embark on a journey to retrieve an ancient relic known as the Sword of Light so that new Rangers can be given the powers of the departing heroes. However, Lord Zedd does not intend to let the Rangers achieve this without a fight and has unleashed his ultimate weapon to destroy them -- the terrifying Serpentera!

Jason, Zack, and Trini are chosen for the World Peace Conference in Switzerland. This means the Power Rangers are going to need a trio of replacements. In order to transfer the powers to anyone else, the Rnagers must travel to a place called the Deserted Planet.

There, they attempt to locate the fabled Sword of Light. The Rangers are not alone on the Deserted Planet as Lord Zedd and Goldar have followed in their own Zord called Serpentera. Serpentera proceeds to crush the Red Dragon Thunderzord and Tor the Shuttlezord in one of its clawed feet.

Back on Earth, to prevent Zordon from choosing any replacements, Baboo and Squatt activate the Sleep Machine, which knocks out most of Angel Grove. Rocky, Adam, and Aisha are spared and try to destroy the machine, only to end up captured by Putties.

Elsewhere, just when the Power Rangers locate the Sword of Light, Zedd fires Serpentera's laser-breath, obliterating most of the Deserted Planet.

Rocky, Adam, and Aisha face the same slumbering fate as the rest of the city until Adam's soccer skills helps to take out the Sleep Machine. Meanwhile, across the galaxy, the Power Rangers barely manage to obtain the Sword of Light and teleport away before the entire Deserted Planet is melted into slag by Serpentera.

Now able to complete the Power Transfer, the replacement Rangers, Rocky, Adam, and Aisha, are infused with the Red, Black, and Yellow Rangers' energies respectively. Zordon bids Jason, Zack, and Trini farewell and tells the replacement Rangers that they are now part of a team and welcomes them to the team as Kimberly tells Tommy this is a new beginning for them. Their first mission comes instantly as Zedd sends his latest monster, Silver Horns, down to attack the city.

Serpentera returns but due to it blowing up the Deserted Planet and the trip back to Earth, it quickly runs out of energy and retreats while the Thunder Ultrazord destroys Silver Horns. In the finale, Jason, Zack, and Trini depart to the airport, with their former teammates and former best friends and the replacement Rangers watching from afar on the Viewing Globe. 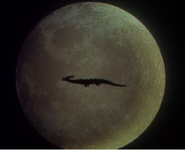