Believing that The Armada are defeated with the deaths of Vrak and Vekar, Orion leaves, only for the Super Mega Rangers to be surprised at the arrival of the real invasion led by Vrak and Vekar's father Emperor Mavro. The Rangers must use nearly every weapon - nearly every Legendary Ranger Mode and Zord at their disposal - to stop his menace once and for all.

Orion believes that Earth is now completely safe, and decides to return to his home planet Andresia. Ernie and the Rangers (especially Emma) are sad to see Orion go, and gives him a bag of mementos. Orion then leaves Earth on his Armada ship. Meanwhile, in order to destroy the Rangers and conquer Earth, Emperor Mavro decides to send every Armada ship in the galaxy to attack the planet. Levira is given a chance to redeem herself, so she creates her own Megazord and goes after the Rangers. When Gosei tells the Rangers about Mavro's plans, Troy says that even though they will have to face thousands of enemies, they have every Power Ranger in history fighting beside them. The Rangers, with the help of Legendary Ranger mode, easily defeat Levira and the Royal Guard with no major trouble at all, but it is revealed that Emperor Mavro used Levira to buy the Armada ships time to reach Earth.

Armada ships then fully cloud the sky, and begin to destroy the city with powerful laser beams. The Rangers combine every Legendary Zord they have in their arsenal and effectively destroy most of the ships, but a bigger second wave of ships arrive, and destroys all of the Rangers' Zords before sending their Legendary Megazord crashing to the ground. The Armada Mothership then delivers a final strike on the Megazord, blowing it to pieces. At the same time, Orion listens to Mavro's threatening messages in his ship. With the Rangers knocked out, Emperor Mavro sends a final message to humanity, telling them that the Armada will be taking over the planet once and for all because of the Earthlings' strong resistance against the Armada. He then declares that the Armada will finish the job the next day at dawn. With the city in ruins, many civilians question whether or not Mavro's claim to have destroyed the Power Rangers is true. As the Megaforce Rangers regroup, several Legendary Rangers - including Tommy Oliver, Cassie Chan, T.J. Johnson, Leo Corbett, Carter Grayson, and Dana Mitchell - are seen throughout the city helping citizens out of dangerous situations. As the citizens prepare for the Armada's attack at dawn, other Legendary Rangers - including Damon Henderson, Karone, and Wesley Collins - are seen amongst the crowds as well.

The Rangers contact Gosei, who expresses his confidence in their ability to succeed despite the loss of their Zords. While the Rangers are initially despondent, Troy rallies them with an encouraging speech, and a familiar Armada ship soon descends with a welcome addition to their forces: a returning Orion. The next day, Redker leads a force of Armada robots to attack the city, only to be challenged by the Rangers. After briefly helping the others fight him, Troy and Orion determine that their only hope of defeating the Armada for good is to infiltrate the Armada flagship and challenge Emperor Mavro head on. Leaving their four friends to continue the battle, they board Orion's ship and manage to crash it into the flagship and make their way aboard. While their friends defeat Redker, the pair challenge Mavro, but he proves a formidable combatant.

However, they manage to turn the flagship's firepower on the rest of the Armada fleet, decimating the entire force in less than a minute. Using their full power, they then defeat Mavro and send the flagship plummeting towards Earth. Much to the horror of their friends, they apparently perish in the crash as the vessel explodes. However, using the powers of the Red and Silver Space Rangers, the two manage to get out of the ship before it crashes. Unfortunately for the Rangers Mavro has survived as well and proceeds to attack them. The rangers then go all out, using nearly all of their legendary powers. Using their legendary power-up modes, they deal the final attack and finally destroy Emperor Mavro.

The group celebrate their victory, only to spot one final menace: a massive army of X-Borgs and Bruisers marching towards the city, summoned by Mavro in his final act of villainy. Despite being vastly outnumbered, the six Rangers are determined to fight, and then receive one final surprise: the Legendary Rangers all appear to aid them in this final confrontation. The Megaforce Rangers gladly welcome their new allies, and refrain from going into Super Megaforce mode due to their confidence about the outcome of the battle. After a furious struggle, all the robots are defeated, and the veteran Rangers-led by Tommy-bid farewell to the Megaforce, assuring them that the older Rangers will always be with them. With that, the Legendary Rangers disperse, and the Megaforce Rangers decide to celebrate their victory, with Troy leaving his sword behind at the site of the final battle and Gia giving Jake a kiss on the cheek. 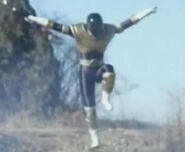 Battlizer Rangers
NOTE:The final Legendary Mode for the extended edition
Add a photo to this gallery

Differences from the original airings

(These errors are exclusive to the additional footage.)

(These notes are exclusive to the extended footage)

Retrieved from "https://powerrangers.fandom.com/wiki/The_Legendary_Battle:_Extended_Edition?oldid=601790"
Community content is available under CC-BY-SA unless otherwise noted.