The Barillian Sting is the fourteenth episode of Power Rangers In Space. It is the beginning of the four-episode story arc that introduces Darkonda, a ruthless bounty hunter.

Darkonda, an evil monster/scientist, joins the Dark Fortress crew, much to Ecliptor's chagrin. He unleashes an alien insect known as the Barillian Bug on the Power Rangers. Carlos is stung by it, and Andros remembers it as a deadly insect that once attacked his homeworld. Cassie also ends up stung, this time by Carlos himself, and they both mutate into Barillian monsters, thus Ashley has to try to fight off Cassie and Carlos. While this occurs, Andros and T.J. head to KO-35 to search for any remaining antidote and cure their buddies before they destroy the Megaship. 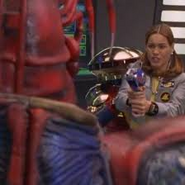 Retrieved from "https://powerrangers.fandom.com/wiki/The_Barillian_Sting?oldid=894831"
Community content is available under CC-BY-SA unless otherwise noted.