A Parting of Ways

Tentaclaw is a octopus themed mutant kidnapper who can separate his head from his body. He is the main antagonist of the episode "A Parting of Ways".

Tentaclaw like all other mutants was created in the result of accident. He once kidnapped the mayor, but was captured by Time Force rangers and imprisoned in the Cryo-prison. He was released in the sixth episode to help Nadira get money. Tentaclaw kidnapped the entire bus full of children and held them for ransom. Despite Wes payed Nadira 10 million dollars, Nadira ordered Tentaclaw to kill children. Soon rangers returned the money and rescued the children, but they had to fight the villain. Tentaclaw separated his head from his body and started to fight the rangers. The rangers defeated head of Tentaclaw with Vortex Blastet, but his body enlarged and attacked the city. Tentaclaw's body was eventually defeated and frozen by Time Force Megazord Blue Mode.

Tentaclaw is wicked, sinister, menacing, greedy and devious mutant. He is cruel, sadistic and villainous and enjoys his job, kiddnaping and horrifying people. He is also cowardly, he feared to loose the rangers. Despite all this, he is shown to be loyal to Nadira.

Tentaclaw is voiced by Ezra Weisz. 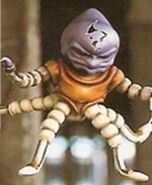