"Six! It's good to be invincible! S.P.D.! DekaBreak!"
―DekaBreak's team roll call[src]
"Nonsense!"
―Tetsu’s catchphrase whenever someone says something he considers ridiculous.[src]

A super elite from S.P.D.'s Tokkyou division who was sent to earth to fight the Hell Siblings, an elite group of Alienizers who have already destroyed 79 planets, Earth being their next target. An Alienizer named Genio killed Tetsu's parents when he was about five years old. Tetsu was raised by the Space Police off-planet. He pilots the DekaBike. His catchphrase is "Nonsense!".

His fighting style is the Seiken Accel Blow, a martial art style of that all Tokkyou officers use when battling Alienizers and utilizes the BraceThrottle for various effects.

In episodes 26, 45, and in Magiranger vs. Dekaranger, Tetsu dresses up in drag to disguise himself. There's some indication that he is interested in Swan-san. In addition, he treats Umeko like a baby sister. He also develops a strong friendship with Ban, calling him "Senpai" (veteran), and promptly replaces him as Jasmine's partner when Ban joins the Fire Squad.

Some time around the conflict between Fire Squad andAgent X's Alienizer faction, Tekkan has given the Tokkyou badge again, thus returned to serve as the Tokkyou and double as Ban's replacement member at Earth Branch from now on.

While driving to the scene where Chigukaden Buildjick was, Jasmine stated that Tekkan is too enthusiastic in these days.

Tetsu appeared in GoGo Sentai Boukenger vs. Super Sentai when he was investigating a case when Eiji came in. Later on he is seen with Tsubasa, Nanami and Asuka as they aid Eiji in defeating Chronos. He transferred his "Justice Spirit" power to AkaRed to power DaiVoyager.

A few years later, Tetsu fought alongside not only his own team, but every single Sentai ranger in existence, against the Empire of Zangyack when it attacked the Earth in the Great Legend War. After fighting against hundreds of Gormin and their Zgormin commanders. AkaRenger noticed the fleet moving towards them, he gathered all the Rangers together and gave them the order to sacrifice their powers to wipe out the first invasion's armada.

After the Zangyack Empire was defeated by the Gokaigers, Marvelous returned the Ranger Keys to their original owners. It is assumed that Tetsu and the rest of the Dekarangers received their keys and were able to utilize their transformed abilities once more.

Ten years after the Dekaranger's final battle against Abrella, Tetsu later became the acting commander of S.P.D. Branch on Earth after Doggie Kruger was being framed. This forces Tetsu to investigate this case alongside Ban, Hoji, Sen-Chan, Jasmine, Umeko, the Neo Dekarangers and several Fire Squad officers. He secretly orders Ban to disguise as Carrie while the real Carrie is brought to the Dekabase in a remote planet by Houji in order to protect her as being witness to her dad's murder. After finding out the truth about Kight Reidlich being a mastermind to these crimes, Tetsu finishes off Clone Abrella in the giant battle before he proceeds to aid his fellow Dekarangers to finish Kight once and for all.

DekaBreak appeared with his team, as part of the six official Sentai, transforming into their Ludicrous Power which combined with the others to form the Ludicrous Cannon Bazooka, which the Akibarangers used to destroy Kameari Alpaca.

DekaBreak appeared with his team among the first 38 Super Sentai whom collectively empowered Wild Tousai Shuriken King in its fight against the titanic Gillmarda, granting the Ninningers and Zyuohgers the power to perform the Zyuoh Ninnin Super Sentai Burst which destroyed Gillmarda with the combined power of all 40 Super Sentai.

DekaBreak worked with his teammates in DekaWing Robo, transforming into the DekaWing Cannon wielded by Kyutama Gattai RyuTeiOh, to keep open the wormhole which would allow the Kyurangers to return to their own space. 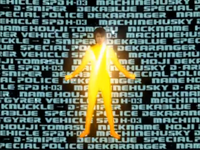 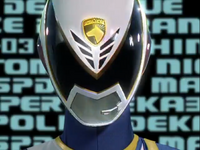 In the Korean dub of Dekaranger entitled Power Rangers S.P.D., which aired in South Korea, Tekkan does not use a nickname and keeps his real name, while his Ranger designation is S.P. White.

Deka Break's name is based on the word "Daybreak" as well as the phrase "take a break.

The DekaBreak Ranger Key (デカブレイクキー, Deka Bureiku Renjā Kī) is Tekkan's personal Ranger Key and what became of his powers after he along with the rest of the 34 Super Sentai sacrificed their powers to end the Great Legend War.

This key, along with the other fourteen sixth ranger keys and the ten extra hero keys, were initally acquired by Basco ta Jolokia and later used by the Gokaigers. Like all of his Ranger Keys, Basco used his trumpet, the Rapparatta, to turn the DekaBreak key into a puppet to do his bidding. The copy DekaBreak was one of the first five sixth rangers that Basco showed Captain Marvelous (Gokai Red), revealing he had found more Ranger Keys. These five puppets fought the Gokaigers and were all defeated, with DekaBreak being defeated by Gokai Pink. Basco left these five keys to Marvelous.

A short while after, the first fourteen Sixth Ranger Reys, along with all the Ranger Keys of the first 33 Super Sentai, were briefly taken by the Black Cross King and turned into Ranger puppets that were fought by the Gokaigers and the Goseigers. The DekaBreak key was among ten of these Sixth Ranger Keys who fought, and were defeated by, Gosei Knight.

While in the possession of the Gokaigers, the DekaBreak Ranger Key was mainly used by Gai Ikari (Gokai Silver), who used it to fight as DekaBreak. It was also used by Joe Gibken (Gokai Blue) on one occasion.

After Zangyack were finally defeated, the Gokaigers gave the Ranger Keys back to their rightful owners. It is presumed that Tekkan received his key and became DekaBreak once more.

DekaBreak is among the vast pantheon of Rangers which are available in the mobile game Super Sentai Battle Base.

DekaBreak appears with his team among all Sentai in the mobile game Super Sentai Legend Wars.