Teakettle Monger is created for a scheme to kill the animals of the world, with its main focus initially to use its gas to kill the pets of the Yumegaoka neighborhood. When it next starts attacking a local zoo, Sun Vulcan appear against it, but have a hard time dealing with the Monger due to its transformation powers preventing it from being attacked. Eventually they connect the Monger to a rabbit hopping around near Yumegaoka, likewise associated with another rabbit that a boy was taking care of with his teacher that was hurt during Teakettle Monger's initial attack. When the boy appears to have the "rabbit", VulEagle identifies it as a Monger and the Monger tries to get away, fighting Sun Vulcan and even briefly becoming VulPanther before they fight it hard enough that its tail appears. The team finishes it off with the Vulcan Ball becoming strobe lights that blind it and forces it to take the attack. After its Expansion Program activates, its dealt with quickly with Sun Vulcan Robo.

His main ability is his ability to transform into anything, whether an object or a living being such as a human or an animal; he even transforms into Sun Vulcan at one point as VulPanther during combat, but also becomes VulEagle and VulShark during his introduction to Black Magma. His lethal ability involves the usage of a poison gas from his head called the Tanuki Gas from his head that kills anything that breathes it in. He is also able to use a pair of swords, turn invisible, divide into balls called the Ball Rain, emit energy surges from his body, and can become a saucer armed with mouth missiles. 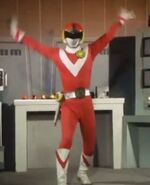 Teakettle Monger (as a bunny)
Add a photo to this gallery

Retrieved from "https://powerrangers.fandom.com/wiki/Teakettle_Monger?oldid=945437"
Community content is available under CC-BY-SA unless otherwise noted.