Lt. Taylor Earhardt is the Yellow Eagle Wild Force Ranger, the Yellow Ranger of the Wild Force Power Rangers. Before Cole's arrival, she was the team leader, making her the first Yellow Ranger to do so. She is also the second-in-command to Cole Evans. She has a long-standing rivalry with Duke Org Jindrax throughout the series.

As a young child, Taylor looked out of an airplane window and saw the Animarium. Little did she know that one day she would be one of its champions. Taylor always had a fascination with planes and flying in general. This interest led her to become a skilled fighter pilot for the Air Force, earning the rank of Lieutenant. While flying around with her squad one day, Taylor witnessed a magnificent sight - the Yellow Eagle Wildzord, soaring in the sky beside her. She followed the Eagle to the Animarium, where she crash landed. She eventually found Princess Shayla and the temple and was asked to become the Yellow Ranger.

Her military training and past had made Taylor rather a bit cold, unfeeling regimental, tomboyish and insensitive, but a rigid leader at times. She takes command of situations and focuses on the task at hand. In battle, she often takes charge and engages the Orgs first, capable of even fighting the Orgs alone in battle when the others are not available.

Taylor has an intense rivalry with Duke Org Jindrax and they often engage in battle, exchanging quips whenever they meet (even in the presence of other Orgs). Like Taylor, Jindrax uses a sword (and darts) in battle and their battles are often fierce, with both exchanging heavy blows to one another (for Taylor, she takes so much damage to the point that her ranger suit is in shreds after her battles with Jindrax). It is implied that they have had a long history of battling, stemming back to over a year when Taylor was the first and only ranger on the team. Early on in the series, Taylor had trouble dealing with Jindrax's swordmanship and quick reflexes, losing a few battles to Jindrax. Over time, she manages to improve her durability and agility and overcomes her early, being able to deal more damage with Jindrax with ease and no longer struggling with his lethal blades winning most of the battles by the end of the series. She did not have an opportunity to battle with Super Jindrax, due to being gravely injured by Super Nayzor and being trapped in limbo.

As the leader of Wild Force before Cole Evans, she wrote a Ranger rule book which Cole quickly dismissed when he joined the team. At first, she resented Cole since, as Red Ranger, he automatically became the team's leader thereby taking her spot. She is turned invisible by Camera Org after losing to Duke Org Jindrax in the episode Click Click Zoom. Cole, who feels guilty, saves her life and gets her body back. She thanks him and makes peace. Eventually however she accepted and respected him, realizing he was meant to lead the team.

The episode The Bear Necessities shows her past life as a pilot and she gets two new Wild Zords.

She faces her old rival Motorcycle Org and looses her Bear Zords to Zen Aku in the episode Revenge of Zen Aku.

When she teamed up with the Time Force Rangers to defeat the Mut-Orgs, Taylor quickly developed a love/hate relationship with the equally dominant and commanding Eric Myers, the Quantum Ranger, because they had a little accident with traffic. The two abrasive Rangers started out consistently clashing with one another, though they eventually gained something of a mutual respect. Eric even lent her the Quantum Defender in battle, something he'd only let Wes Collins wield before.

TV STORY-Reinforcements from the Future

After the final battle with Master Org, Taylor gave up her Ranger powers and returned to the Air Force, where she was looked up to as a legend by the younger members. She frequently meets her friend the Yellow Eagle in the sky.

Taylor and the other Wild Force Rangers returned as part of the army of Legendary Rangers that helped the Mega Rangers defeat the Armada once and for all, fighting in a huge battle against hundreds of X Borgs and dozens of Bruisers.

Taylor along with the other Wild Force Rangers among all the Ranger teams which appear in the Korean-developed mobile game Power Rangers Dash. 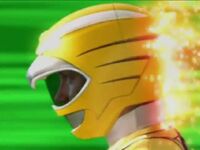 A skirted version of the Yellow Wild Force Ranger as seen in Super Megaforce.