Tatsuya Asami (浅見 竜也, Asami Tatsuya) is TimeRed (タイムレッド, Taimu Reddo) of the Timerangers. The protagonist, he is a martial artist who was "drafted" into the team to unlock the Chrono Changers.

Tatsuya is 22 years old at the beginning of Timeranger.

Tatsuya Asami attended college after losing a bet against his father in a karate match against his friend and peer Naoto Takizawa. Although Tatsuya was welcomed by the more prestigious students in college, he felt disconnected from them and wished to avoid the upper-class students in favor of a more normal life. After graduating, Tatsuya attempted to convince his father to let him leave the Asami Group and follow his desires to further his karate skills, only for his requests to fall on deaf ears.

On the morning of February 13, 2000, Tatsuya found the Timerangers amidst the wreckage of their Chrono Ship. After being attacked by the team when mistaken for escaped convict Lila, who had been disguised as the near-identical Captain Ryuya, Tatsuya is quickly roped into Timeranger as Time Red and decides to change his "destiny" by breaking away from the Asami Group entirely as part of the team.

After joining Timeranger, Tatsuya decides to move out of his father's house and uses his savings to rent the building that would be the Timerangers' home. Tatsuya works as a Karate Teacher at "Tomorrow Research," an entrepreneurial business composed of a variety of jobs for each member. When operating the Robo formations, Tatsuya is usually in charge of accessing the finisher moves to recapture the Londerz Prisoners by wielding a miniature version of the Space-Time Sword/Chrono Divider to mimic the movement pattern.

As he bonds with the rest of the Timerangers, Tatsuya begins to contemplate the issue of fate and work to encourage those around him of their ability to fight destiny, but also feeling the pressure of his own fate coming back to haunt him. He finally announces his refusal to become the Asami Group's heir to his father, leaving for Tomorrow Research instead, much to Wataru's disdain.

Although Yuri is the team leader, Tatsuya is the driving force of the Timerangers, essentially acting as field commander during the battles.

He is the first to learn of Ayase's Osiris Syndrome, keeping it a secret from the rest of the team at Ayase's request until his near-fatal collapse in December of 2000. He also finds himself constantly at odds with Naoto upon his acquisition of the V-Commander and his Timefire abilities.

Tatsuya also develops feelings for Yuri, which begins to weigh heavily on him upon realizing that they will be forced to part ways after the arrest of the Londerz Family.

In the finale, a year after the final battle, Tatsuya continues to live freely by himself choosing this lifestyle until he feels that he is ready to join his father's company.

A copy of TimeRed was part of a Copy Timeranger team that fought the Timerangers in a pocket dimension.

TimeRed is among the Sentai warriors seen in clips when Yuusuke Amamiya (Red Falcon) lectured Gaku Washio (GaoYellow) about the past Sentai sword experts, showing him that the true sword wasn't the sharpest, but the one that feeds on courage.

Led by his Liveman predecessor Red Falcon, he appeared as one of 24 previous Red Rangers in Gaoranger vs. Super Sentai together with fellow Red Rangers from his predecessors AkaRenger to GoRed.

As the twenty-fourth Red, TimeRed's Red Warrior Spirit was embodied by AkaRed.

Years later, Tatsuya fought alongside not only his own team, but every single Sentai ranger in existence, against the Empire of Zangyack when it attacked the Earth in the Great Legend War. He and his team were seen fighting alongside with the Tokusou Sentai Dekaranger team. After fighting against hundreds of Gormin and their Zgormin commanders. Kaijou noticed the fleet moving towards them, he gathered all the Rangers together and gave them the order to sacrifice their powers to wipe out the first invasion's armada. The TimeRed powers are later used by Captain Marvelous via the Ranger Keys.

After the Zangyack's final defeat, Captain Marvelous returned the Ranger Keys to their original owners, it is assumed Tatsuya and his teammates have their powers again.

Tatsuya, alongside his team (bar TimeFire), among the majority of the Super Sentai heroes, was caught up in the "Super Hero Taisen" incident which eventually resulted in the Super Sentai teams and Kamen Riders joining forces to defeat both Dai-Zangyack and Dai-Shocker. During the final battle, he is seen fighting a Gormin, and a Dogormin.

As the Timerangers arrived from the future, the TimeRed seen here is assumed to be Captain Ryuya rather than Tatsuya Asami. Though either way, the net movie is out of continuity.

TimeRed appeared as part of a conference of the first 38 Reds led by Red Falcon, whom addressed the Ninningers and Zyuohgers as the greater Super Sentai pantheon intervened to save them from defeat at the hands of the titanic Gillmarda. Empowering the Combination Nin Shuriken to form Wild Tousai Shuriken King, the first 38 Super Sentai further imbued their successors with the power to perform the Zyuoh Ninnin Super Sentai Burst, destroying Gillmarda with the combined power of all 40 Super Sentai.

Tatsuya joined the Super Sentai Strongest Battle as a member of Martial Artist Team, where he partnered alongside RyuuRanger and fought against GingaBlue and GaoBlack of the Super Strong Team in the fourth round of the competition and won the match before disappearing.

Tatsuya alongside with his Sentai Red Ranger predecessors appeared to help the Zenkaigers. 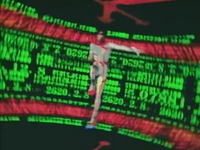 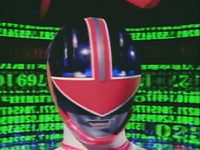 Tatsuya Asami is portrayed by Masaru Nagai (永井 大, Nagai Masaru) (Played as "永井 マサル") on top of portraying Captain Ryuya in a dual role. Nagai would later go on to portray Master Black in Kishiryu Sentai Ryusoulger. As a child, he was portrayed by Masato Arima (有馬 優人, Arima Masato). As TimeRed, his suit actor was Seiji Takaiwa (高岩 成二, Takaiwa Seiji).

The TimeRed Ranger Key (タイムレッドレンジャーキー, Taimu Reddo Renjā Kī) is Tatsuya Asami's personal Ranger Key and what became of his powers after he along with the rest of the 34 Super Sentai sacrificed their powers to end the Great Legend War.

This key along with the majority of the Ranger Keys were collected by the Red Pirates and later used by the Gokaigers. The TimeRed Ranger Key was mainly used by Captain Marvelous (Gokai Red), who used it to fight as TimeRed. It was also used by Gai Ikari on one occasion.

The Timeranger keys, along with all the Ranger Keys of the first 33 Super Sentai, were briefly taken by the Black Cross King and turned into Ranger puppets that were fought by the Gokaigers and the Goseigers. Splitting up, the puppet TimeRed was defeated as part of a group of surviving Red warrior keys by Gokai Red and Super Gosei Red.

After Zangyack were finally defeated, the Gokaigers gave the Ranger Keys back to their rightful owners. Tatsuya received his key and became TimeRed once more.

A Timeranger Zyudenchi which bears the likeness of TimeRed is part of the Legend Sentai Zyudenchi toyline which can be used in Super Sentai Battle: Dice-O.

Tatsuya Asami/TimeRed: to be added

TimeRed is among the vast pantheon of Rangers which are available in the mobile game Super Sentai Battle Base.

TimeRed appears with his team among all Sentai in the mobile game Super Sentai Legend Wars.