Epic 14: Birth of the Ultimate Tag!

Targate specializes in teleportation and is one of Mons Drake's top soldiers, offering his aid in eliminating the Goseigers to take Dereputa's place as Mons Drake's right hand. The Goseigers try to first defeat him as he sinks sections of the city, but he escapes with the team pursuing him. Approaching an area where Moune was, he throws Gosei Yellow into one of his portals with a nearby Hyde running after her in order to save her. While the other Goseigers try to hold him off on their own, Moune and Hyde discover the weakness of Targate's portals through the hole they entered into the dimension with, escaping using Gosei Blue's Presshower to slip through the hole. As the team returns together and take him down. They try to destroy Targate with the Gosei Buster's Gosei Dynamic but he survives, leading the team to summon the Sawshark Header, Kuwaga Header, Hawk Header, Crow Header, and Rhino Header. They then attached them to their Gosei Blasters at him simultaneously which finally takes him down with the Sky-Land-Sea Bullet.

After being grown by Buredoran, the Goseiger defeat him with a combination of Mystic Gosei Great Mystic Strike and Datas Hyper's Datas Dynamic Crash. 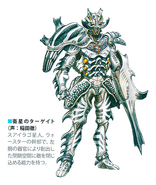 Targate of the Satellite Concept Art