Retroactively, she is also referred to as Zeo Yellow Ranger or Yellow Zeo Ranger, though these are in reference to the show, as opposed to proper labels. She has also been labeled Turbo Yellow Ranger, a variation on her in-show label.

After the evil Master Vile reversed time and rendered all the Power Rangers as helpless children, they were sent through time to collect the fragments of a mystical item called the Zeo Crystal. The current Yellow Ranger, Aisha Campbell, traveled to Africa where she encountered a lion. Right before the lion attacks, Aisha was rescued by a young girl named Tanya Sloan. Though she found her Zeo Sub-crystal, Aisha wished to stay in Africa to help sick animals in a time that doesn't detract from her journey as a Power Ranger (possibly 1995).

TV STORY-Legacy of Power Therefore, Tanya agreed to return to the present in her place.

When the five Zeo Sub-crystals were finally reunited and Master Vile's tampering with time had been undone, Tanya discovered that she had grown into a teenager along with the other Rangers. As Tanya was the most inexperienced of the group, it was briefly considered that Aisha's Zeo Powers go to Billy Cranston. He declined, however, because he felt that he served his purpose, though he was willing to take the powers himself if Tanya didn't feel up to the task. Tanya accepted and became the new Zeo Ranger II Yellow.

Tanya began her tour of duty as one of the newest members of the Power Rangers team while having to cope with the Machine Empire invasion, as well as having her world turned upside down by leaving her time period and entering the Angel Grove of the 1990s as an orphan. To help her cope with her temporal displacement, Katherine Hillard convinced her parents to let Tanya stay at their place.

Luckily, Tanya adapted quickly to her new lifestyle and began to learn martial arts from Tommy Oliver and Adam Park. She joined the Angel Grove High baseball team as a pitcher. She briefly dated a young man named Shawn, but broke up with him because of his bad attitude towards her. They eventually reconciled and decided to remain friends. She was also an excellent singer, and her summer job as a DJ caught the interest of a recording company. Presumably, she accepted their recording contract upon retiring as a Power Ranger. Also, despite her lack of a formal education, she revealed herself as one of the wisest of the Power Rangers, easily solving mysteries that often left her friends baffled.

It was eventually revealed that her real parents had been explorers, who had left her in Africa when they went searching for the "Lost Tiki of Auric" on the fabled Mysterio Island. After receiving a letter from Aisha and her old tribe, she managed to find and rescue them on the island. She learned that the "Lost Tiki" was in fact the form of the ancient hero, Auric the Conqueror, whose care she placed in the hands of Jason Lee Scott, who was serving as the Gold Ranger at the time.

When the evil Space Pirate Divatox plotted to summon a powerful monster named Maligore in order to gain power through marriage, Tanya, along with the other Rangers, accepted new Turbo powers. She became the Yellow Turbo Ranger and gained the Dune Star Turbozord. Tanya continued to fight against Divatox, but eventually she and the other Ranger veterans passed on their powers to worthy successors shortly after graduating from high school. Tanya selected as her replacement the Angel Grove cheerleader Ashley Hammond to continue on as the Yellow Turbo Ranger while Tanya resumed her singing career.

Tanya was featured in a chronicle of Power Ranger history compiled by Tommy Oliver shortly after he formed the Dino Rangers, which was found by the nascent Ranger team in the Dino Lab.

Tanya returned as a Zeo Ranger with Rocky, Adam, Trey, and Kat, as part of the army of Legendary Rangers, led by Tommy as the Green Mighty Morphin Power Ranger, that helped the Mega Rangers defeat the Armada once and for all, fighting in a huge battle against hundreds of X Borgs and dozens of Bruisers.

As Zeo Ranger II Yellow, Tanya followed her original timeline until the Shattered Grid event, which for her, occurred shortly after the events of Good as Gold.

Receiving Zordon's call through the Morphin Grid, Tanya was among the Rangers who rallied to his pocket dimension for the last stand against Lord Drakkon.

After having her Morpher reinforced by Doctor K, Tanya took part in a mission to Lord Drakkon's fortress to rescue captured Rangers, and was subsequently aboard the Promethea when it was trapped in an unknown dimension known as “The Void”.

Trapped on the Promethea for over 4 weeks, Tanya was willing to board the Promethea ship on a mission to find life aboard on an unknown vessel. While dealing with hostile forces on the vessel, Kimberly saves Mike from attempting to send himself out of the airlock with them. Tanya criticizes his reckless behavior and the two of them develop a bond.

Tanya appears as a playable character in Power Rangers Zeo vs The Machine Empire.

As a young child, Tanya is very quiet, but is incredibly smart despite her age, she's also kind, friendly and always wanted to save the world someday.

As a teenager, Tanya retains much of her personality like before, but is now also brave and loyal, she has always been big-hearted. She is fiercely loyal to her friends, and loves music. She is an excellent singer and plays the piano well. Tanya is very athletic. She is very good a karate, and sometimes figure skates. 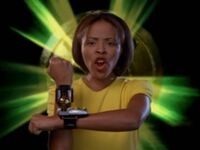